Telling the Story of Ferguson Voices

To most people, the story of Ferguson, Missouri, began in August 2014, when a young black man, Michael Brown, was shot and killed by a white police officer. The events of that summer have renewed importance in September 2017, after another white officer was found not guilty of murdering Anthony Lamar Smith, also a young black man. (The actual shooting of Smith occurred in December 2011.)

As the St. Louis community attempts to extract meaning from events that have become part of a national narrative, the Ferguson Voices project offers insight into the experiences of real people whose lives were forever changed. Ferguson residents found an outlet for working through complex emotions by speaking out about their own experiences.

TOKY recently worked with two organizations, PROOF: Media for Social Justice and University of Dayton Human Rights Center, to launch an interactive website for Ferguson Voices: A Moral Courage Project. What started as a research project for Dayton students turned into a one-of-a-kind web experience that helps users understand the events of that day with context from the local community. 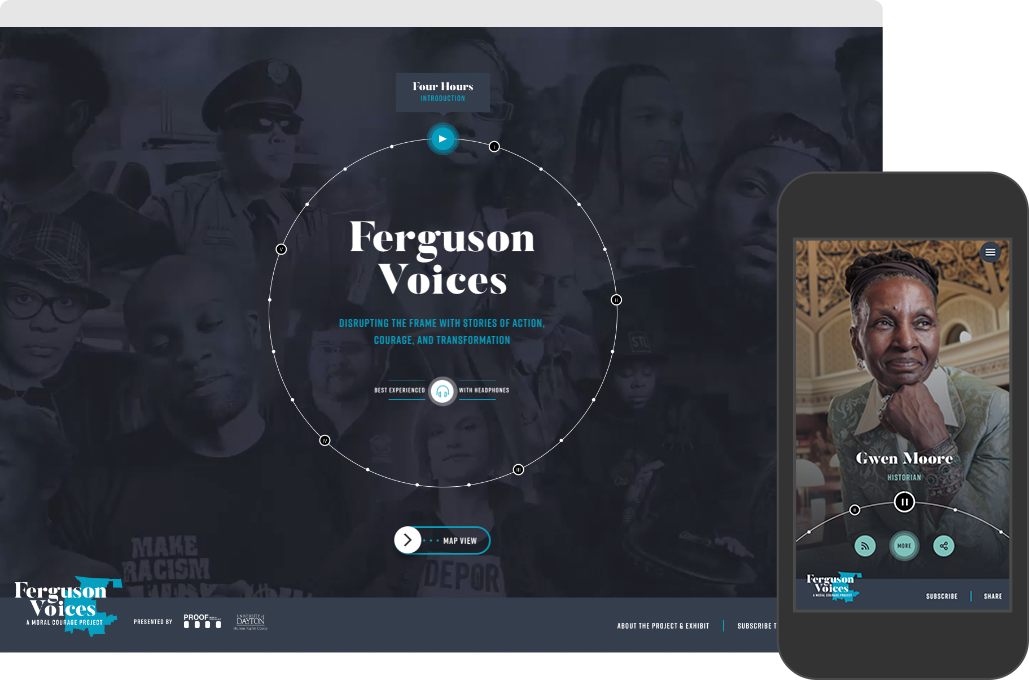 Along with local photographer Mark Katzman, our own creative director, Geoff Story, helped capture portraits of some of the subjects interviewed for the project. The images have a raw energy that doesn’t shy away from discomfort and honesty.

The collaborators from PROOF and University of Dayton originally imagined the Ferguson Voices project to be a traveling installation, marrying audio with a physical exhibit. TOKY encouraged the team to think digitally, and ultimately as a team we created on an online experience that introduces the user to the thoughtfully crafted podcast, while providing a deep dive into the events from an individual or geographical perspective.

Ferguson Voices could not have been possible without the passionate storytellers at PROOF and the University of Dayton. As a Moral Courage Project, it challenges the public perception of difficult events and encourages people to speak their truth. The desire is ultimately to understand the human elements at play and to inspire a better tomorrow for communities all over the country.

It was our pleasure to work with teams at PROOF and the Human Rights Center on such an important project. Through the Ferguson Voices experience, we hope our world can become more thoughtful, more humane, and more beautiful — a set of values we care deeply about.