With a sustained and significant interest in the arts — museum work has long been one of our central sectors — TOKY was proud to be both an exhibiting sponsor and have staff in the sessions, soaking up the knowledge.

If you’re one of our 1,000 or so Twitter followers, you’ve already heard some of the points that caught our ears. Among them: 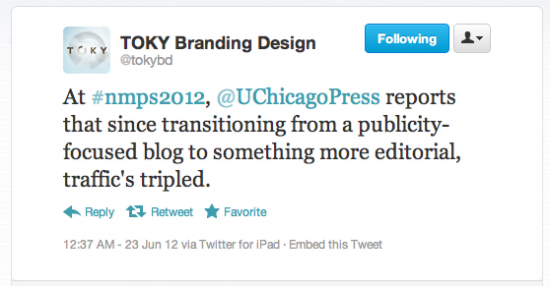 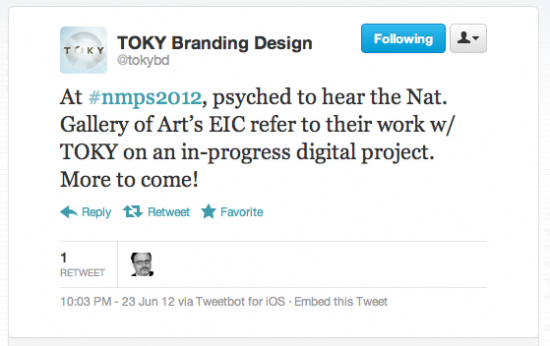 The tweets were relatively few, though, compared to the large amount of consequential discussion over the conference’s two days. As the highly regarded museum editor and publisher Kara Kirk (of the Getty) put it, this is a moment of great disruption in museum communications. Never in her decades of museum work, she told one gathering, has she felt the urgency she feels today.

This made for some memorable sessions. My notes from the conference are pushing 3,000 words, and there are some lengthy conversations to be had with our museum clients. For the TOKY Blog, I’ll try to keep things relatively brief and offer five key take-aways:

1. Your institution doesn’t have a single “voice.” You’re now a chorus.
Daniel Sinker, who kicked off the event with an opinionated and salty keynote, put it this way: “The voice of the museum is everywhere.” This even includes, say, those visitors posting Instagram shots from within your walls; leverage the love they’re showing you. (How many of you, Sinker asked the crowd, have websites with photos taken in the last three hours?)

I believe it was Paul Schmelzer, Web Editor of the Walker Art Center, who said for him the museum’s voice was now made up of the following: Staff, Members, Visitors, Outside Experts, Online Audiences, and Living Artists.

In a terrific presentation, two Museum of Science and Industry staffers talked us through their highly successfully “Month at the Museum” program, providing a real-world example of a museum strengthening its voice by handing its microphone over to someone outside the institution.

2. With your website, don’t just market or promote — write about your subject, editorially curate, offer opinions.
Clearly, one of the major museum website relaunches this year has been the Walker Art Center‘s, which operates like a journalistic online magazine about the arts. This approach isn’t necessarily right (or feasible) for every institution, but it was great to have the above-mentioned Schmelzer explain how they did so in Minneapolis. And why. “Publishing,” he told a large crowd, “is a means of creating an identity.” And the site’s more editorial approach “better communicates the ideas of the institution.” Traffic is up, by the way (averaging 600,000 page views per month), and the human visitor numbers are up as well.

Kristi McGuire, Online Publicity Manager for the University of Chicago Press, spoke about how much they’ve gained from transitioning from a website with a promotions/marketing focus to one that took a more editorial approach, writing about the subjects UCP and its readers were interested in. The current tag line for The Chicago Blog says it all: “Intelligent commentary, curated content, news, reviews, and all things digital, published by the University of Chicago Press.” Traffic has tripled since they’ve stopped talking just about their own books to the several subjects they’re passionate about. McGuire has also strategically made inroads on social media, launching a Tumblelog (where the Press can be a bit more “wry”) and spending more time on Twitter and Facebook, where she “cross-pollinates” their content and launches book-specific campaigns. Since November 2010, the Press’ Facebook followers have grown by 400%, with Twitter followers growing by 300%.

3. Jump on some cool projects and get them out to the public quickly.
One of Dan Sinker’s key statements from his keynote was this: “Move away from preciousness.” Just because your museum cares for precious objects doesn’t mean everything you make has to be made preciously — just so, over many months, not shared until it’s been vetted by every senior staffer. You’ll be rewarded with engagement by finishing some smaller communications pieces — a two-minute video with a conservator, a Facebook gallery of behind-the-scenes installation shots — even if they don’t match your collection catalogue in depth and polish.

Erin Coburn, Chief Officer of Digital Media at the Metropolitan Museum of Art, was one of several presenters to champion iterative publishing — sharing parts of digital projects with the public as they’re finished. Robert Sharp, Executive Director of the Art Institute of Chicago’s Department of Publications, shared how its online Monet catalogue was built and released in an intentionally iterative fashion. And Sarah Roberts, Associate Curator of Collections and Research at SFMOMA, said we’ve got to be agile in museum publications. Focus on the “right now” solution, as it’ll be outdated as soon as you post it anyway. “We must work and release,” she said, “at the speed of our day.”

4. Yes, the digital realm will be increasingly key for museum publishing departments. But no, sorry, no one’s cracked it.
As each museum publications department prepares for an upcoming exhibition, the question comes up: Print book? E-Book? App? All have their place. But in this time of disruption, you won’t necessarily feel like you’ve got the right answer. Don’t blame yourself or assume you’re alone in the fog. But do engage with the options and learn from your experiences. Publish, test, look at the data, talk with your readers or shoppers, share your experience with your museum colleagues.

One of the key NMPS sessions around this topic was “Are Jackets Required?: Rethinking Museum Publications in the Face of New Technology, Increasing Expectations, and Shrinking Budgets.” It seemed like everyone’s notepad (or iPad) was filling up as a Guggenheim staffer walked us through that museum’s trio of publications for Maurizio Cattelan: All. You’d need to hear this whole presentation for proper context, but, as a thank you for your time, I’ll share the sales numbers shared with us: The Guggenheim’s Cattelan print catalogue ($45) sold almost 10,000 U.S. copies; the app ($4 phone, $6 tablet) sold 5,200 copies; and the e-book ($20, knocked down to $9) sold … 28 copies. As I said, there were lots of circumstances behind these numbers (how they were marketed or not; where they were available; what staff knew about them), but everyone likes numbers, so there you are.

5. Focus on content — especially content that can travel — without assuming the content will have a single and ultimate container.
In my write-up on May’s Confab content strategy conference, I quoted leading web thinker Karen McGrane, who told us: “You are not in the print/mobile/web/brochure business. You are in the content publishing business.”

For museum professionals, the message becomes: Don’t confine yourself to thinking just about an exhibition catalogue, a single website page, a member magazine spread, an app feature; instead, focus on creating compelling content (a single essay; an interview series with curators), then help it find various homes in your various outlets.

SFMOMA’s Sarah Roberts comes at museum publishing from a scholarly/curatorial background, which one could be forgiven for thinking would lead her to have a slower, more cautious approach to publishing. Yet she was wonderfully forward-thinking about developing and sharing content for museum audiences. While she once thought of an essay, for example, as “part of a book,” she now thinks of it as a “unit of content” that can have many homes. We should now, she said, make essays modular, adaptable, portable — able to live everywhere.

As Roberts spoke of these pieces needing to be able “to travel,” I recalled another moment from Confab, when a presenter quoted Brad Frost’s great line, “Get your content ready to go anywhere, because it’s going to go everywhere.”

If you’re prepared, if you’re engaged.

This post ended up longer than I expected — apologies, but the issues are critical to this important sector and the insights shared highly valuable.