It’s been a big year for TOKY and the ADDY Awards, with our firm earning major recognition from the local through the national competitions.

As mentioned previously on the TOKY blog, 11 of our projects were nominated for St. Louis ADDY awards, with three of them winning gold. Since then, six of our projects won at the district (or regional) level. And just recently, we learned that one of our Pulitzer Foundation for the Arts projects has won silver in the U.S. competition. Congrats to our team and our terrific clients! 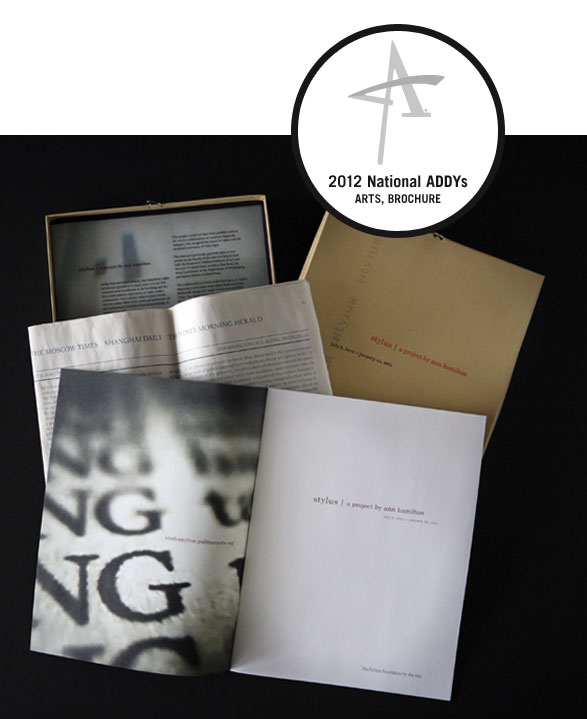 Here’s a run-down of these newly announced ADDY wins:

Silver — The Pulitzer Foundation for the Arts; stylus: a project by Ann Hamilton box

The national ADDY judges have bestowed a silver award to TOKY’s highly original catalogue for the exhibition stylus | a project by Ann Hamilton, on view at the Pulitzer Foundation for the Arts during late 2010 and early 2011. Upon their first viewing of the exhibition, visitors were given a box containing a few initial items as a kind of first step toward an exhibition catalogue. Over the following months of the show, materials like jumping beans, silk screens, and pieces of newspaper were periodically made available both at the Pulitzer and online for visitors to add to their boxes, fostering a new degree of personalization and interactivity between the art and its viewers.

Once again, congratulations to the TOKY staff and our fantastic partners at each of these organizations!