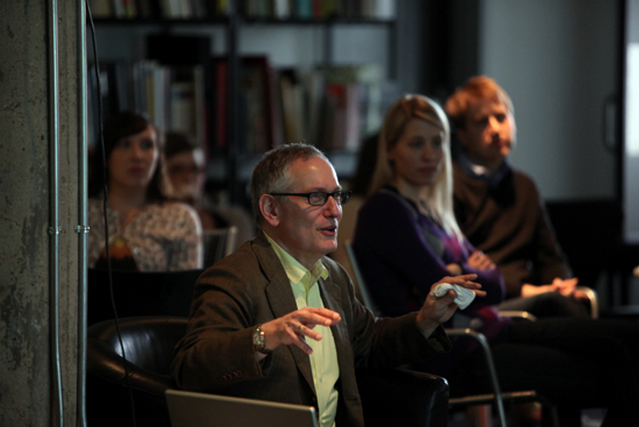 Venezky’s work (done through his studio, Appetite Engineers), is tied together not by an aesthetic, so much as a devotion to a process. He designs in a way similar to that of a scientist setting up an experiment. In lieu of thumbnail drawings, he defines several parameters — establishing the laws of a miniature world of sorts — and then designs in a way that makes sense within those boundaries. This usually involves a combination of minimal materials, maximal design sensibilities, and a lot of time.

Venezky is a big proponent of a slow process, often spending multiple days, if not weeks, on activities such as X-acto cutting letters from old magazines and catalogs, folding bits and pieces of paper, photographing and assembling the glare reflected from car windows around town, or getting the right ink smudges in his notebook during his bus commute. The resulting work is at once both kinetic and meditative, in which endless cutting and pasting leads to a high degree of carefully considered complexity, all without losing a sense of playfulness and weirdness. A typical Venezky piece of advice: “Design a typographic system that can be goofy, but calm down when it needs to.”

Thanks to Martin Venezky for making time for this lunchtime lecture in his pretty tight travel schedule. Great talk, inspiring work.