Note: This is part of a new series of TOKY blog posts about artful trips our staff have taken. This one’s from Senior Web Developer Tyler Craft.

The Spiral Jetty is an earthwork sculpture constructed in 1970 by Robert Smithson. It’s located in the remote Rozel Bay on the north arm of Great Salt Lake in Utah. Even though this is one of the most unique works of art I’ve ever seen, I primarily remember it because of the adventure it was just to get there.

In 2006, my wife (girlfriend at the time), Rachel, and I took a trip out west. We love National Parks, and always manage to base our vacations around them. This vacation was no different, with an itinerary that featured Yellowstone, Glacier National Park, and a drive through the Grand Tetons.

With some convincing on Rachel’s part, we added one more park to the list: Golden Spike National Historic Site. To be clear, though, her primary objective was to see the Spiral Jetty.

After leaving Jackson, Wyoming, we took Highway 89 south through the beautiful Bridger National Forest, passed through Logan, Utah, and made it to Brigham City, where we stayed in a classy 20-room Howard Johnson’s, one of the few hotels in the area.

We woke up early the next day and started our pilgrimage. After about an hour driving through a desolate, arid landscape, we finally arrived at Golden Spike; the temperature was already in the upper 80’s. At this point we had not seen a single sign for the Jetty. The only reason we knew we had 15 more miles was thanks to the Dia Foundation’s somewhat comedic directions (“Immediately you cross a cattle guard. Call this cattle guard #1”; “If you choose to continue…”). 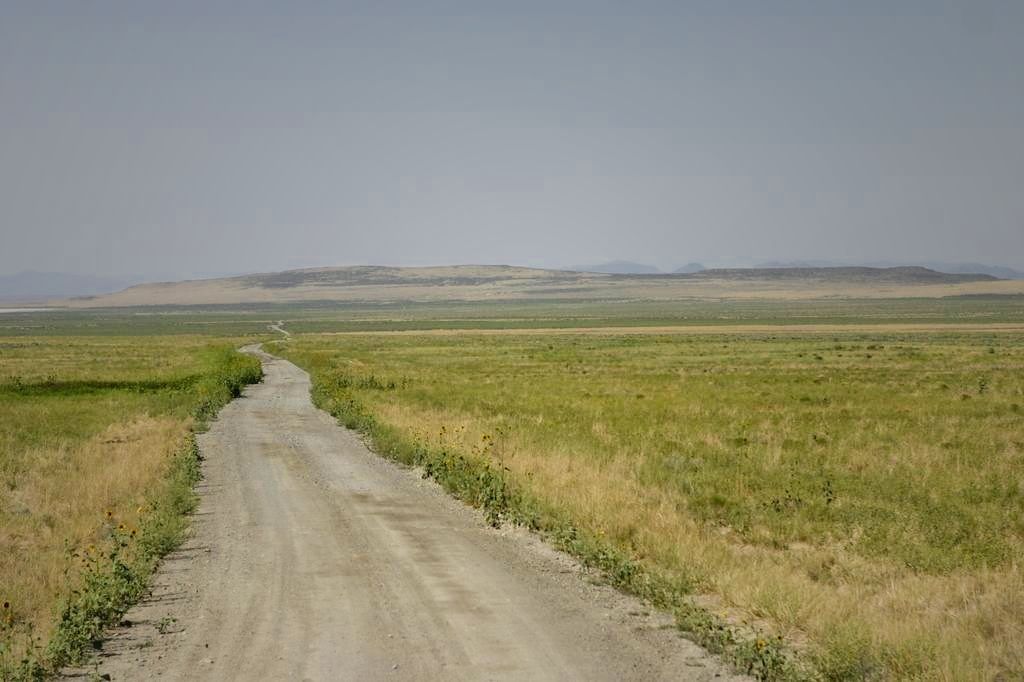 Even with Dia’s instructions, we weren’t sure if we were going in the right direction. Every fork or cattle fence made us stop and question if we missed a turn. Thankfully, there was one sign that let us know we were not on the right path. 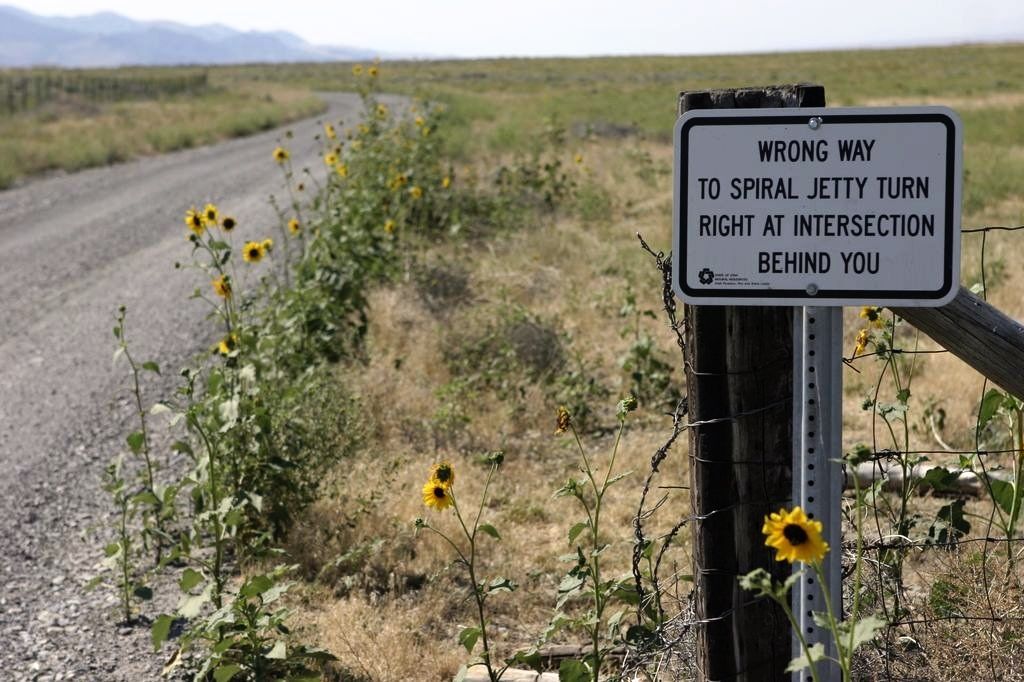 As we got closer, I started to feel as though we had driven to another planet. In the distance I could see the lake, which was blood-red. It’s color is “due to the presence of salt-tolerant bacteria and algae that thrive in the extreme 27 percent salinity” (Wikipedia). The land around the lake was extremely arid and covered with large volcanic basalt rocks and the occasional rusted shell of an automobile. 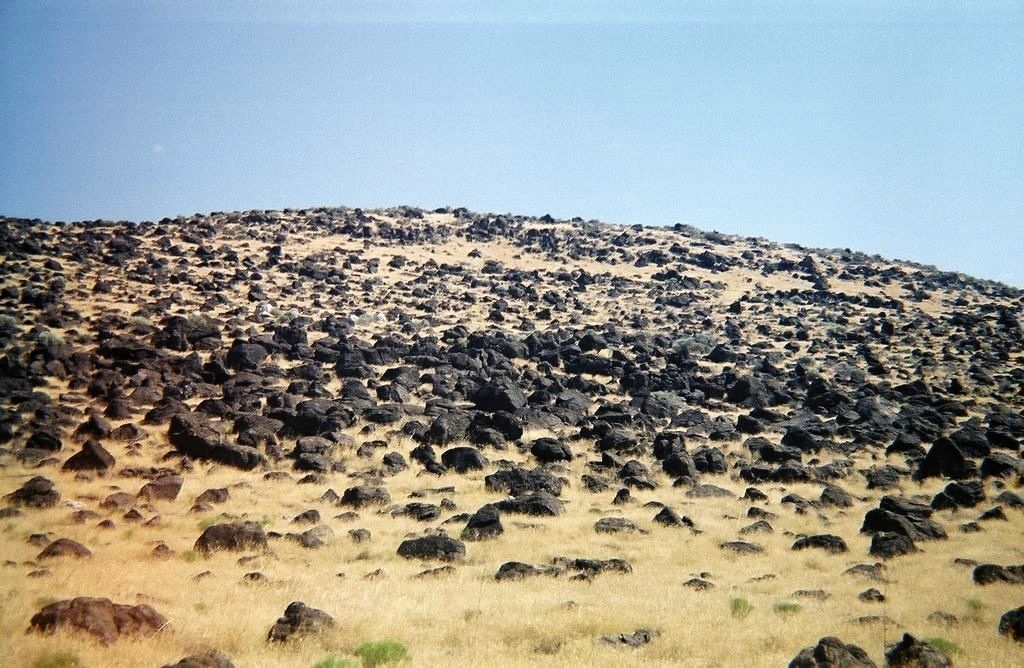 The road came to a stop, and we went on foot down the only trail we could find. After about a mile we came to the Jetty. At the time of our 2006 visit, the water was high and the tops of the rocks were barely sticking out over the red water. Stopping on a hill, I had one of the most surreal experiences I’ve ever had. The Jetty was in front of me, abandoned oil drills in the distance, dried salt beds to the east and volcanic rock behind me. I felt as though I stumbled into Kurt Vonnegut’s The Sirens of Titan. Aside from Rachel, it seemed as if no other person existed. 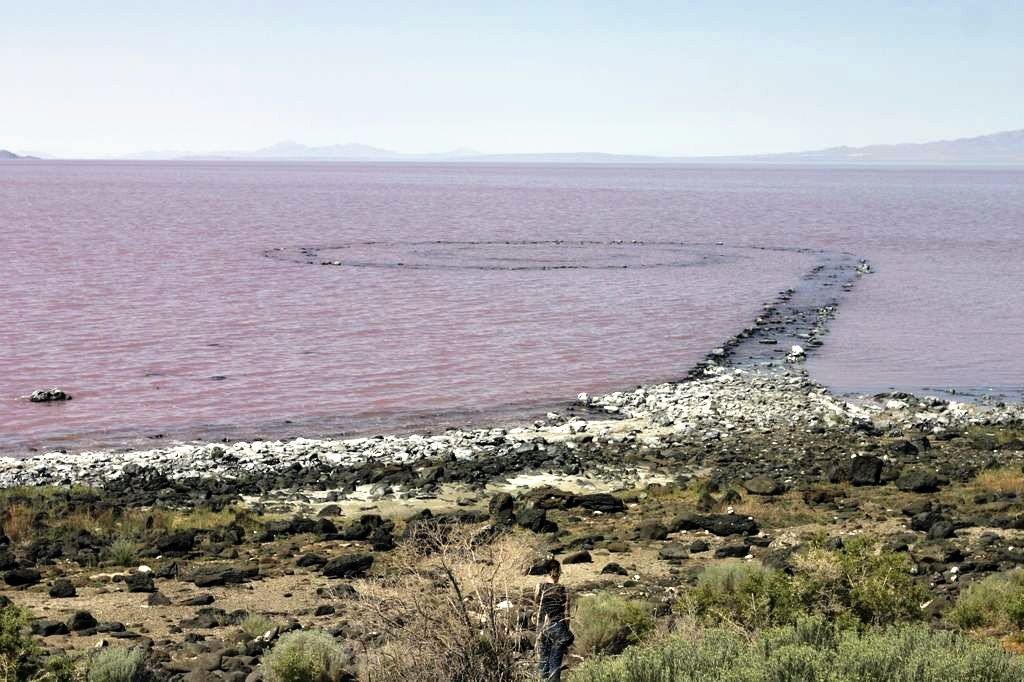 The website for the artwork explains how it was built: “Using black basalt rocks and earth from the site, the artist created a coil 1,500 feet long and 15 feet wide that stretches out counterclockwise into the translucent red water.” While the rocks were originally black, due to the salt, they are now primarily white.

It’s worth noting that the Jetty is only visible when the level of the Great Salt Lake falls below an elevation of 4,197.8 feet. Since the Jetty was built during a drought, it was submerged for three decades until 2004, when it was exposed for almost an entire year. 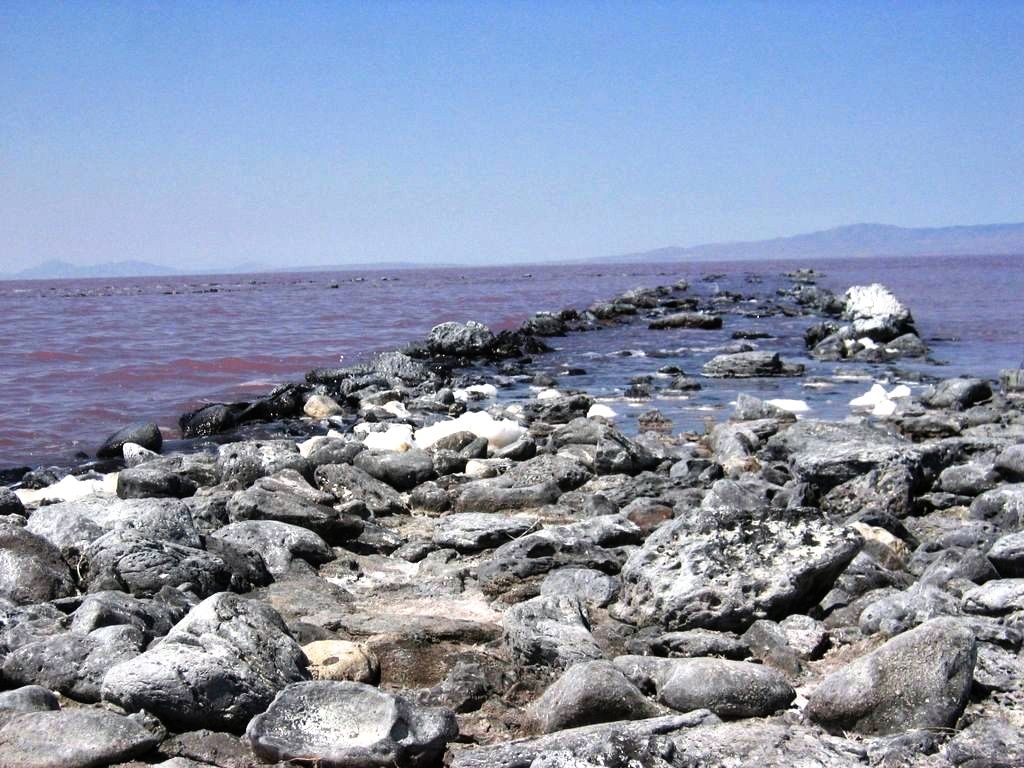 After walking out as far as we could on the rocks, we meandered a little east of the Jetty to some dry salt beds. The Great Salt Lake has a history of oil drilling, and this area felt like a graveyard for it. The horizon was decorated with abandoned oil rigs while the foreground was scattered with rusted-out oil drums.

To be honest, I hadn’t been very excited about this part of our trip. The Jetty looked interesting in photos, but I wasn’t sure if it would be worth the two days of my precious vacation time. However, after being there, I can honestly say it was one of the most unique experiences I’ve ever had.

If you find yourself a day or two drive from Utah, I highly encourage a visit. You won’t forget it.

An endnote: In 2011, the Dia Art Foundation’s lease on Spiral Jetty expired, and the state of Utah took it over. There were many fears over the future of the Jetty, including threats of oil drilling nearby. But just last week, the Dia Foundation announced that it has successfully reacquired the lease from the state, for at least the next 10 years.