Among challenges, it’s a pretty good one to have — how to top what’s been generously deemed a success.

Each year, TOKY designs the end-of-year Gala invitation for the St. Louis Public Library Foundation. We have lots of fun with this project, and the pieces over the last few years have really connected with the public and our design peers across the country. Last year’s “Texts in the City” invitation continues to receive kudos in national competitions (FPO, HOW, Graphis), and its predecessors have been recognized in leading design publications such as Communication Arts.

This December, the St. Louis Public Library’s Central Library will reopen its doors, following a $70 million restoration and modernization. It will do so during the institution’s 100th anniversary year. The 2012 Gala, therefore, feels like perhaps the most significant yet — both capping the extraordinary campaign undertaken to make the renovation happen, and ushering in the institution’s second century. We were determined to rise to the occasion.

Several of us toured the Central Library earlier this fall, and the restoration is truly spectacular — we took photos and pointed and “Wow”‘d and took more photos. Our design team wanted this year’s invitation to provide the recipient with a foretaste of the surprise and grandeur everyone will feel as they first walk into the new space. After exploring a range of approaches, our team decided on an intricate miniature model of the new entrance, turning it into a pop-up to add a whimsical element of surprise.

We left the exterior white and put the color in the background so that with the bright color coming through all those little windows feels like the life and light is shining through; while the building is a remarkable work of architecture, what’s inside is most essential. We also added design elements that pick up on architectural details and patterning found throughout the building.

We experimented with many colors along the way to the final product. Since the Gala will be celebrated in mid-November — right between Halloween and Thanksgiving — we wanted to stay away from any fall colors that might get lost in the holiday-themed shuffle. The Library has been recently rolling out an array of materials in its C2YW branded bright blue, so we thought it made sense to align with that effort. We ended up switching out the C2YW blue with its fluorescent ink equivalent — which was eye-catching against the bright white of the paper stock. This gave the card a crisp clean look, perfect for a New Beginning/Grand Opening and (we hope) a crisply beautiful November evening.

The final invitation — showcased below — was bundled in a belly band and a seal, so that recipients have to go through a bit of an unwrapping process, building up the anticipation before the pop-up pops. This act of “opening,” of course, is especially relevant this year, as the institution itself reopens to the public. 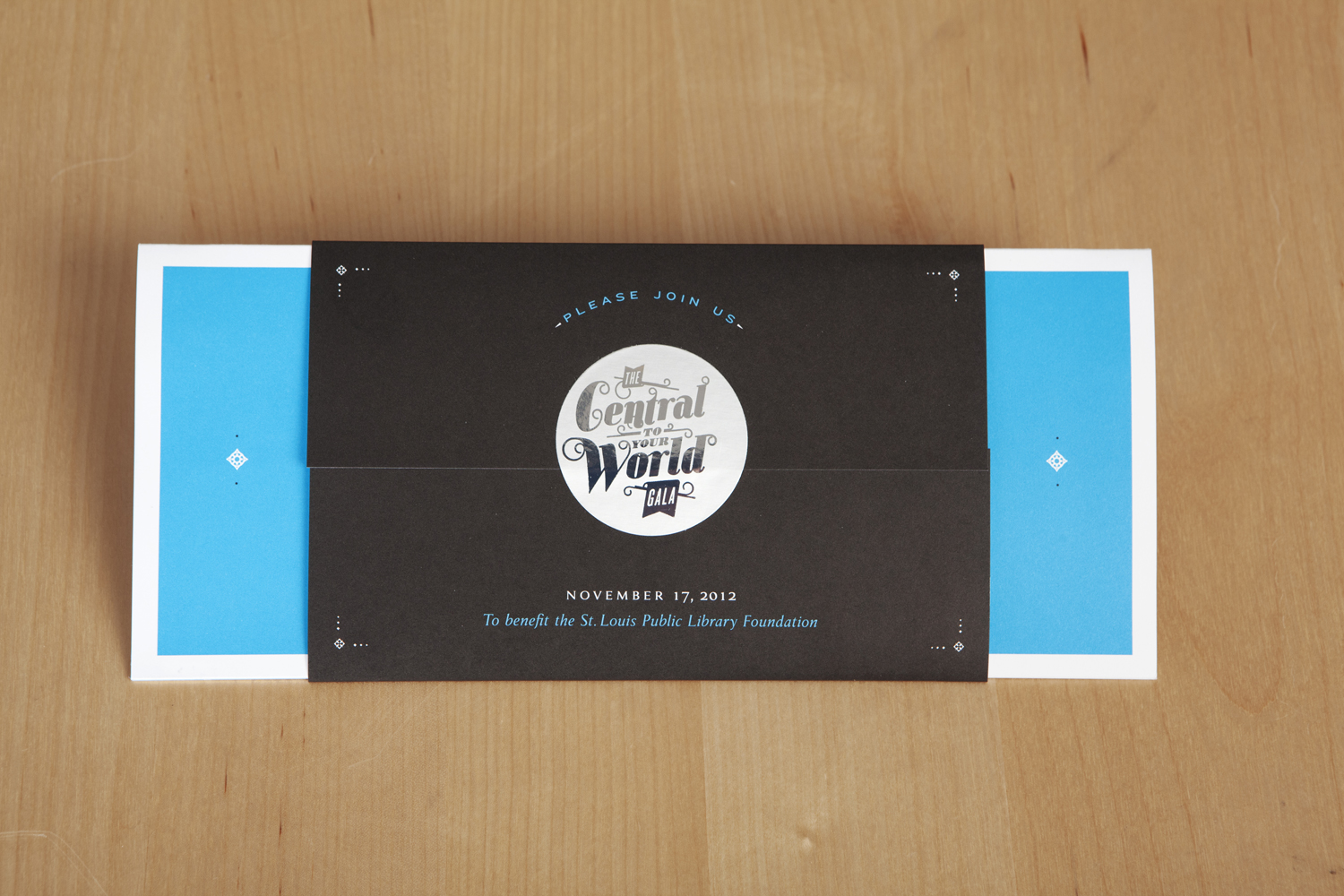 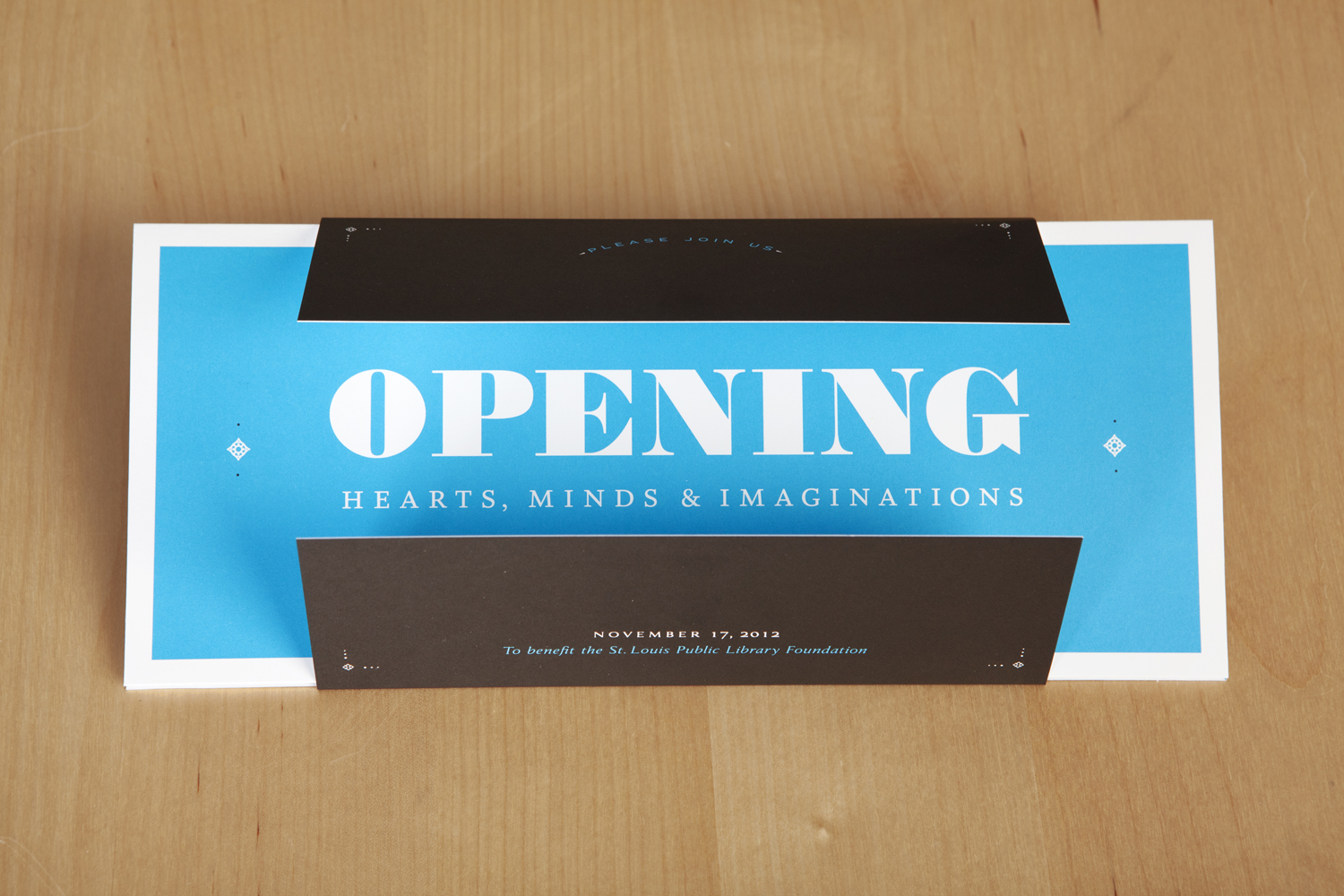 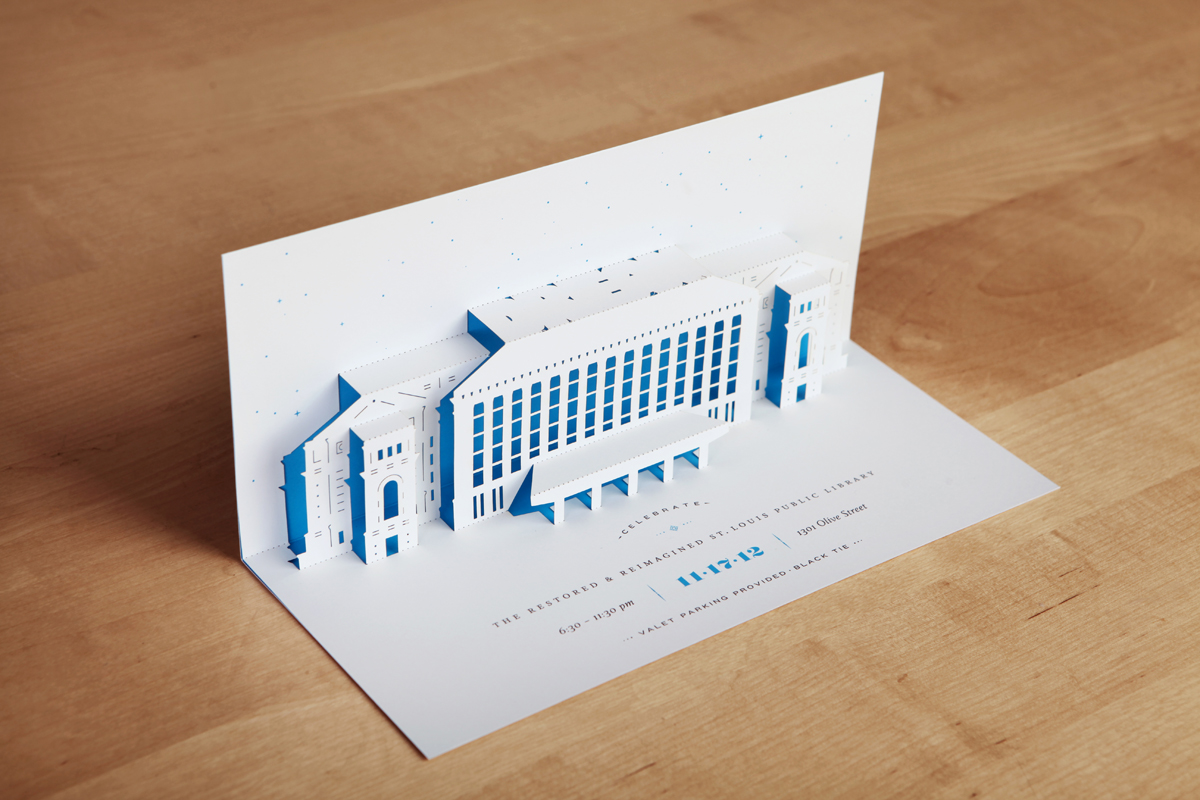 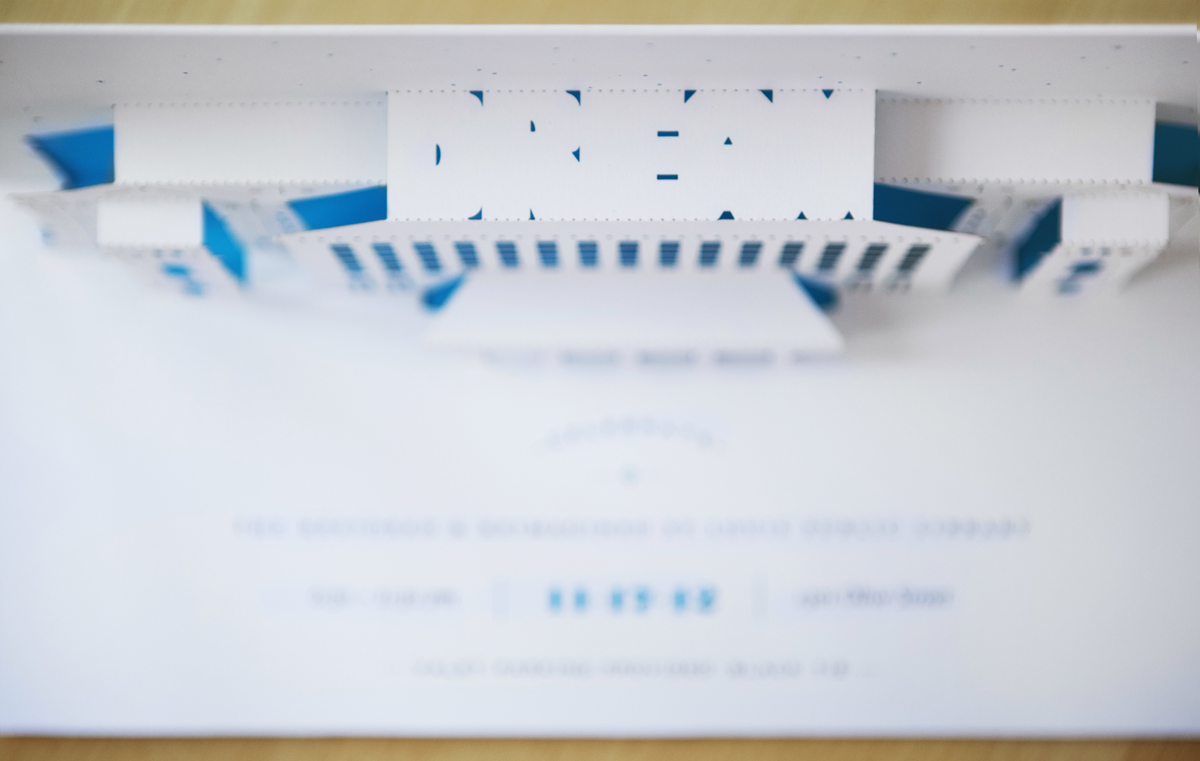 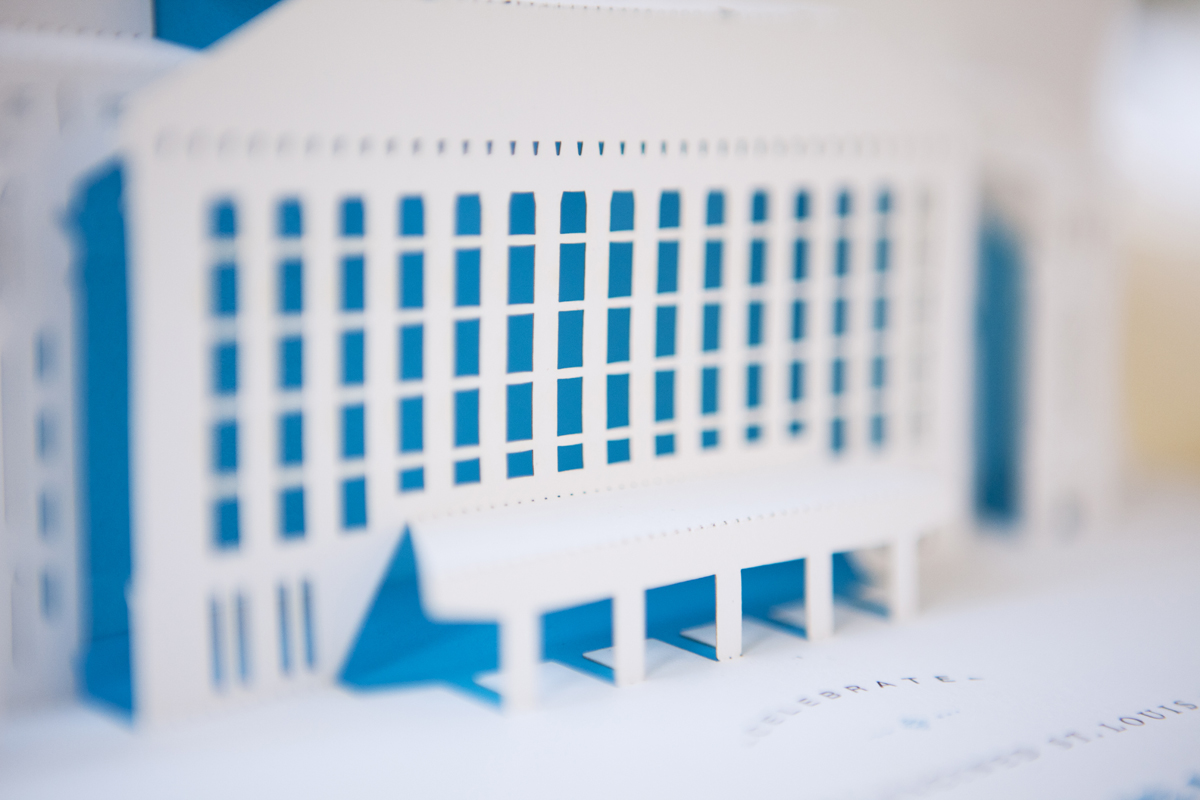 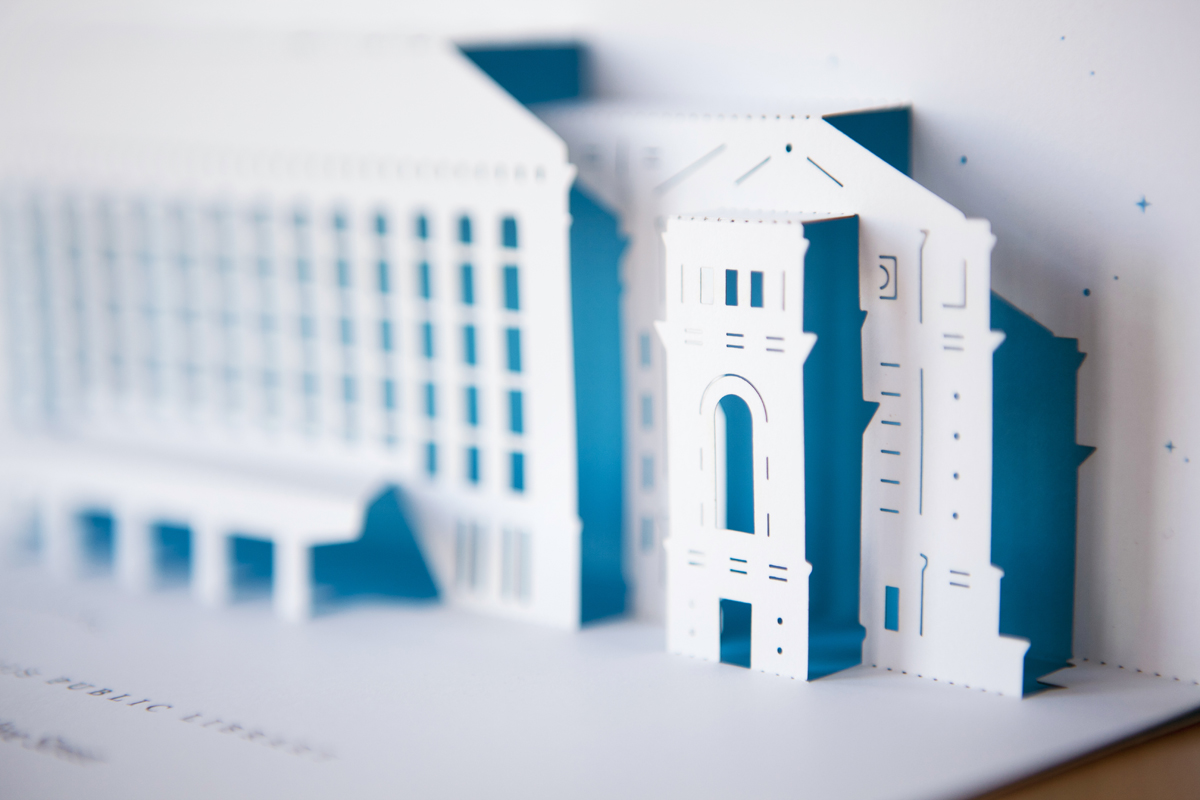 If you scroll three photos back up, you’ll see that we very subtly placed the word “DREAM” onto the building’s roof; this word is integral to Central Library’s spirit, and, as visitors will soon see, the word plays a prominent role in the Young Adult section.

Our design team reports that this project — in terms of production — was probably the most complicated several of them have ever worked on. They began with CAD drawings from the renovation’s architects, which needed to be scaled and simplified before being translated into perspective levels for the pop-up. Our team made several paper mock-ups (only two of which are shown in this post) at various levels of complexity to make sure the dimensions were right and that the pop-up would work. Over the course of a few weeks, several versions were developed and assessed by TOKY, the printer, and the project’s laser die-cutter to ensure the structural integrity of the paper. After printing (2-color offset), we sent flat sheets off to be laser die-cut. Once those were finished, they still needed to be scored, folded, glued, assembled, and stuffed before mailing. 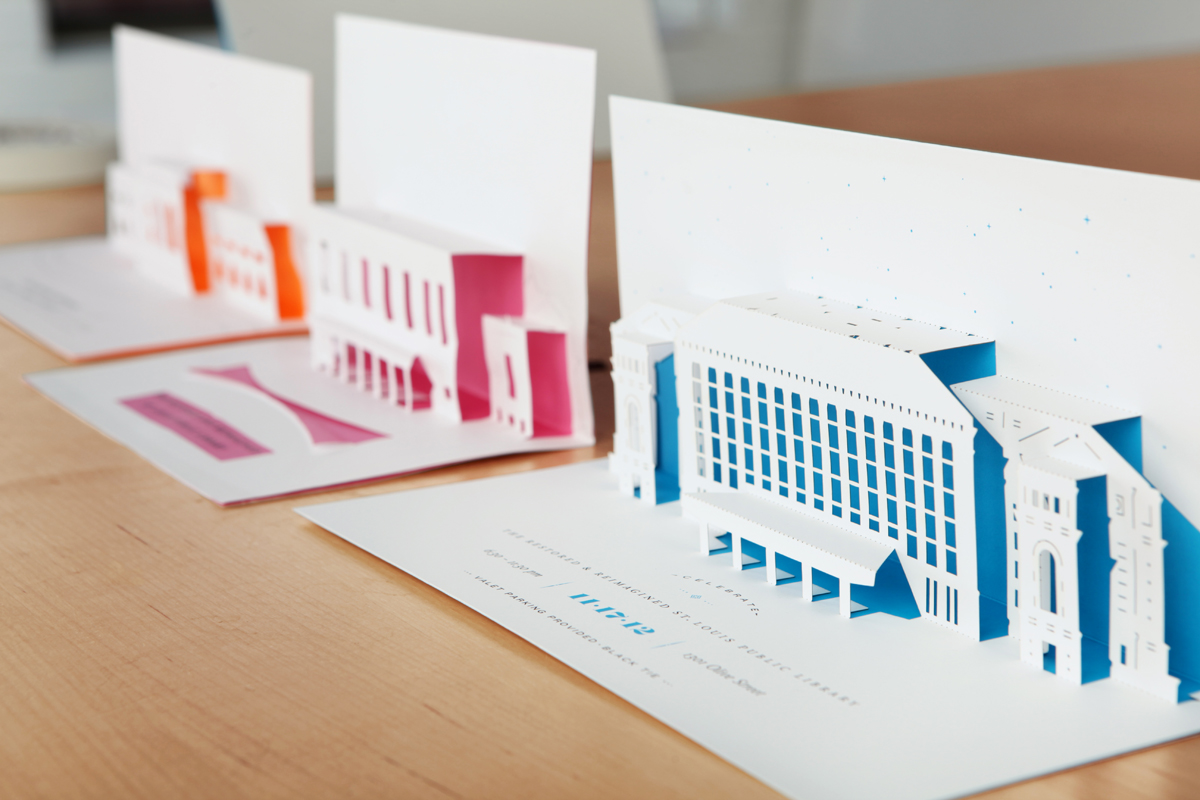 The Central to Your World Gala will be held at the restored Library on November 17. Due to significant interest in the event, all ticket reservations are now being placed on a waiting list. Library staff anticipates that a limited number of $1,000 Patron-level tickets will be available by the end of the month.

Our thanks to our Library friends for yet another special project. TOKY has been a major supporter of the Library since this Campaign’s inception, and we are proud to have increased our support during this transformative year.

Update: We’ve been honored to see this client work earn some appreciation from the online design community.