For the past 12 months we’ve been working with Armstrong Teasdale, one of St. Louis’ most prestigious and venerable law firms, on a rebranding initiative that has been one of the most enjoyable we’ve ever undertaken. Let me say that again… working with these attorneys has been creatively thrilling. Surprise! 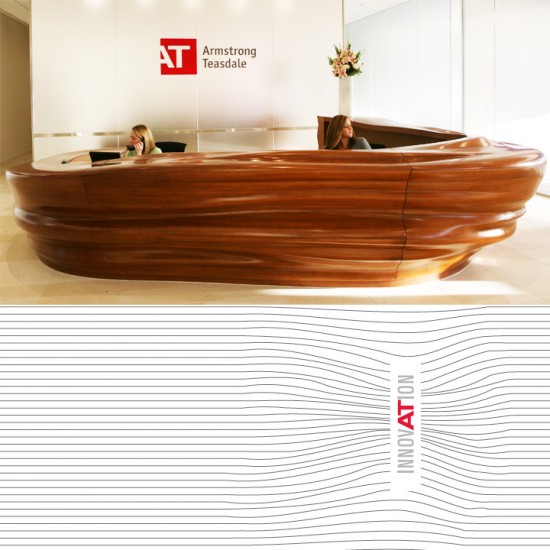 AT brought us in to rebrand as they were moving from their walnut-panelling and crystal downtown offices to spectacular new offices in Clayton’s Centene Tower. It was time for a new brand identity to launch with the new space. And what new spaces they are! Designed by Studios Architecture, the space is both thrillingly contemporary and filled with a sense of veiled power. Throughout, clean glass lines are interrupted by immense shape-shifting wood forms whose curves undulate and enclose, as if the fabric of space has been disrupted by some unseen gravity well.

Why would a firm so comfortably ensconced in conservative offices undertake such a radical reimagining? That became the question TOKY wanted the new AT brand identity to answer. We scrubbed away any superfluous embellishment from the old Armstrong Teasdale square logo, leaving just a crimson square where the initials are caught in the midst of movement. On the back of every piece of letterhead, every business card, is a pattern of hairline rules that suddenly is warped by the presence of one of a dozen words: Innovation, Litigation, Imagination… These “disruption words” each contain the initials AT; Armstrong Teasdale is integral to these qualities. The message is clear: AT is reimagining the practice of law for organizations of this era.

The new AT branding has been a wonderful example of visionary client, brilliant architects and devoted branding firm reinventing — and, in the process, reinvigorating — a company on its way to comfortable stuffiness. This resets the clock on a great company.