Google warned digital marketers prior to this week’s release of their new “Mobile Friendly Update” algorithm. Yet, concerns surrounding Tuesday’s D-Day reached a fever pitch and, for many, it sounded like it came as a surprise. Tech writers called it “Mobilegeddon”.

(The Web Team at TOKY has some side eye for those doomsday preppers, but that’s another story.)

So, what does “Mobilegeddon” actually mean? First, let’s back up and give you a crash course on Google.

The most popular search engine, Google runs on a complicated system of algorithms to deliver the most relevant results following a user query.

“You want the answer, not trillions of web pages. Algorithms are computer programs that look for clues to give you back exactly what you want.”

These algorithms can be thought of like formulaic recipes – pulling together the best of the web that answers a user’s search terms. Everything from keywords and content to page performance and the user’s search history are weighed in Google’s equation.

A cursory evaluation of Google’s algorithmic changes shows that these updates arrive pretty frequently. These are typically geared toward fine-tuning existing search formulas to deliver more accurate results and weed out spam content and bots.

The Evolution of Search

The less-than-typical changes are the heavy hitters; these are the ones that concern digital marketers and web designers alike. These updates are the formulaic changes that directly impact how websites are designed and content is created.

Hummingbird
The last time Google dropped this seismic of a search change was in 2013 with the “Hummingbird” update. This update rolled out in late 2013 and was Google’s official way of backing content over keywords. Focusing on “conversational search”, Hummingbird was responsive to how users were framing their search queries in terms of questions rather than individual words or phrases. The importance of each word in the search query was weighted to infer the user’s intention as well as to deliver results that offer more targeted, detailed answers. While it didn’t entirely kill SEO, Hummingbird meant the overall quality of the site copy mattered most, instead of the “keyword stuffing” that many spammy websites were using to game the system.

Caffeine
Prior to Hummingbird, Google’s previous major change was “Caffeine” in 2010. Less focused on the user experience, Caffeine changed how the data itself was collected. This allowed Google to index sites and content with web crawlers to aid in making the search process faster and more accurate.

In effect, Google’s changes have nudged (or strong-armed, depending on your stance) websites to implement better practices that engage users and deliver information in a more natural way.

Which leads us to Mobilegeddon.

Before you start playing some R.E.M. or hitting up Bruce Willis and Billy Bob Thornton on speed dial, this newest change really isn’t the end of the world. At least not yet.

To understand Mobilegeddon is to understand Americans’ relationship with mobile technology and internet use.

Mobile internet use has skyrocketed.

However, a significant percentage of adults in the US have limited options for accessing the internet, and, for many, their smartphone is their link to the world. This section of the tech population tends to be socio-economically depressed and less upwardly mobile and is more prone to rely on their internet-enabled devices to navigate health concerns, job searches, and other basic needs. 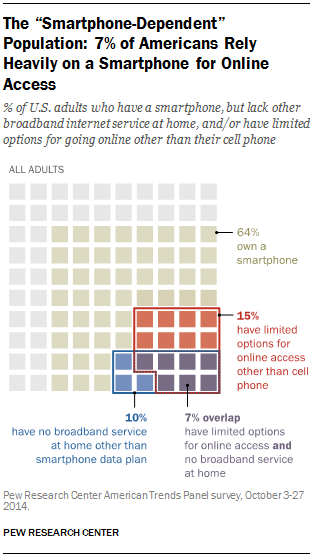 Compare that to just four years ago, when only 35% of adults had internet-capable mobile devices.

In the early days of web surfing through your phone, standalone apps were a booming business. However, now that devices, designers, AND users are more tech-savvy, apps are on the decline and mobile sites are on the rise. Fewer than 35% of smartphone users download any sort of app each month even as mobile browsing continues to rise.

In the name of democratizing the internet, Google’s latest algorithm change makes sense. Two means of browsing the internet enter. One browser leaves.

Google’s “Mobile Friendly Update” is designed to give preferential mobile search treatment to websites that are responsive: they’re easily resized and read on a tablet or smartphone. The practice of creating responsive websites isn’t new — it’s been a recommended best practice for any web designer worth their salt for some time now. (You might recall that TOKY wrote about transitioning to responsive fairly recently.)

The problem is, responsive sites can take more time and expense to build, meaning some businesses (and designers) chose to cut that corner in the process of a new build or as a means to update an older website. By one estimate, more than 40% of the Fortune 500 companies failed Google’s “Mobile Friendly” test.

With Google’s Mobile Friendly Update, leaving a responsive site as icing on the cake isn’t an option anymore. At least, not without fully accepting that a non-responsive website will be pushed down in search rankings in favor of other competitors who embraced new technology and user-first design.

So, in terms of “Mobilegeddon”, this is a crisis for businesses with non-responsive websites who expect their lead generation to come from search. If your site shows up lower in search (if at all) it won’t be clicked on by your target demographic. That’s a kick to the pocketbook, isn’t it?

One could argue that the lost revenue as a result of Google’s Mobile Friendly Update on a non-responsive site is far more costly than the expenses of updating to a responsive site itself.

However, if your site was created to be responsive, this really isn’t the end of the world as we know it. It’s just another way that Google is trying to foster better search results that incorporate how real users behave on the internet.

Curious if your site passes muster? Run it through Google’s test.

If it doesn’t, or if you’re just looking for an overall refresh, TOKY’s Web Team is more than happy to help navigate you through the process. We’ve got the tech expertise and the design chops to bring your site into the new era of Google and survive “Mobilegeddon.”