The Making of the Band (Poster)

Often, the most challenging projects become the ones that fill us with the deepest satisfaction — both because of the complexity in problem-solving and the beauty of the discovery process.

Recently, a project for our dear friends at Falling Fences presented a very unique set of challenges. We wanted to create a visually intricate, limited-run album release poster that echoed the band’s rustic, handcrafted aesthetic. The design was beyond lovely. The expectation was lofty. And the execution was a challenge — even for experienced creatives.

Begin at the End

First off, let’s start with the finished product so you can really get a sense of scope and payoff.

And at the Beginning 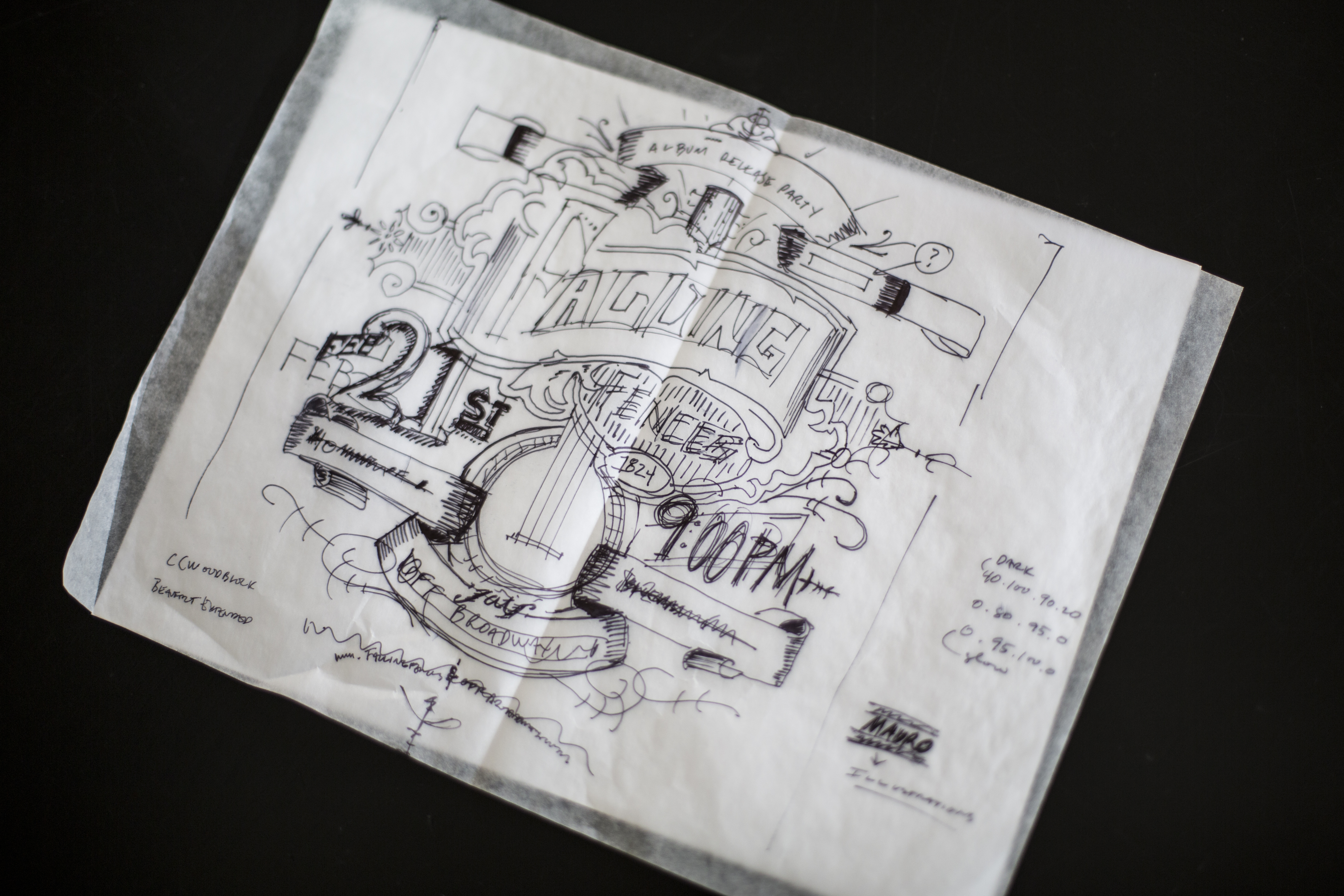 The original logo design concept was the brainchild of TOKY designer, Travis. For this album release poster, we wanted to include the logo and surround it with scrollwork and filigree. With this concept in mind, TOKY designer Dan Klevorn took on the task of building out the illustration into a show-worthy poster. This humble sheet of tracing paper was what became his poster design. As you can see, the lovely scrollwork and engraving-style are already established, but the typography and fine details (that would prove to be complicated for a screen print) were still evolving.

This peek at the creative process illustrates a few things. For all of our technology, we’ll never be able to replace the texture, satisfaction, and freedom that comes from pen and paper. Some of our best ideas have started with a messy little scrawl. Even ideas that become great can look messy at this stage – it’s better to have it all out and smooth away the rough edges than to discard ideas from the start.

The Devil in the Details

Once the design was finalized, we partnered with Kyle Gray from Melt Prints, a local, small-press screenprinter to produce the limited run posters. 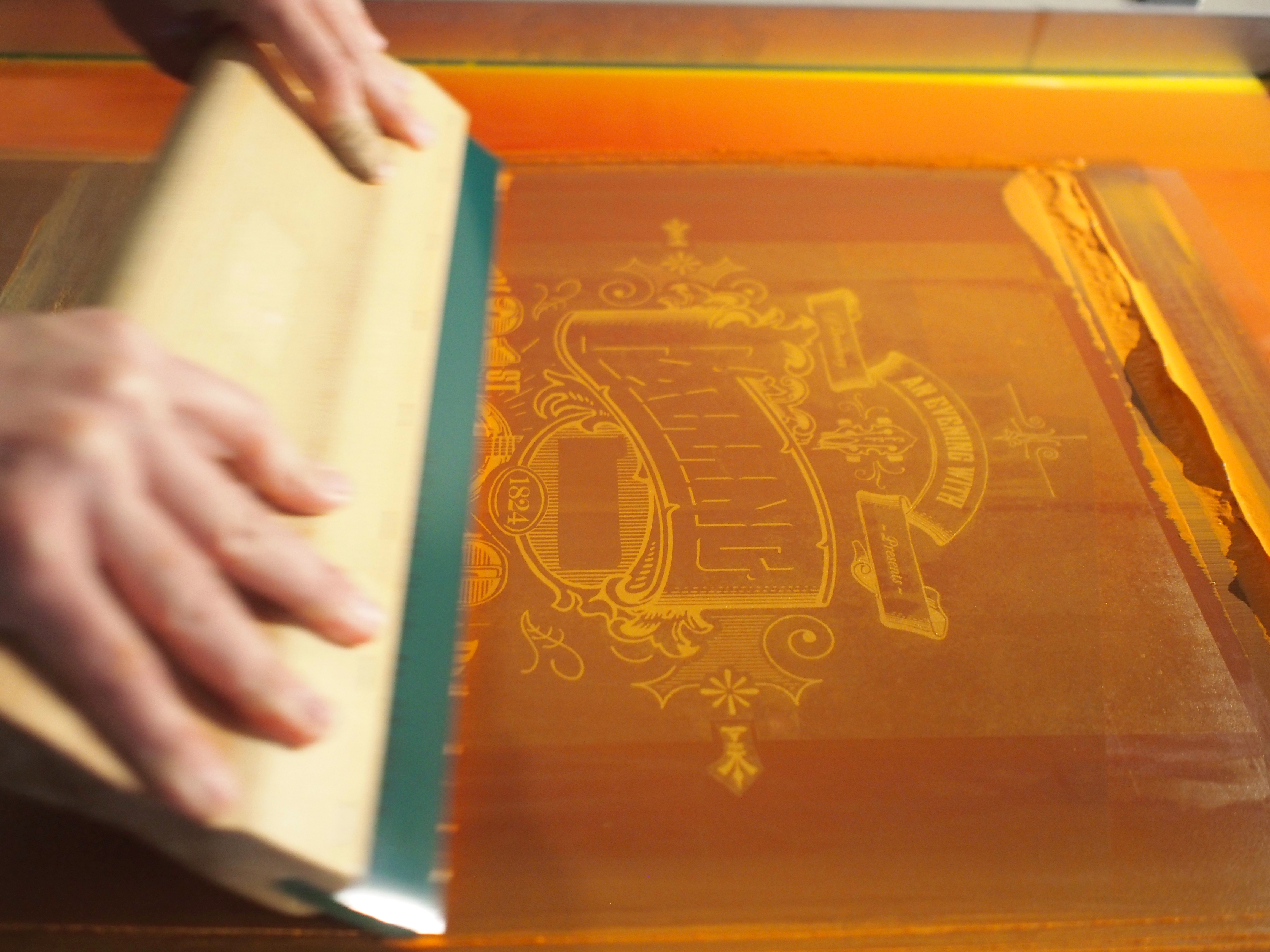 Dan chose a beautiful, uncoated Mohawk stock in a rich black for the paper and a luscious gold and white combination for the inks. The paper itself had an inviting texture that was very toothy and porous. The very things that attracted us to the paper and pigments proved to be the source of many of the challenges to come. 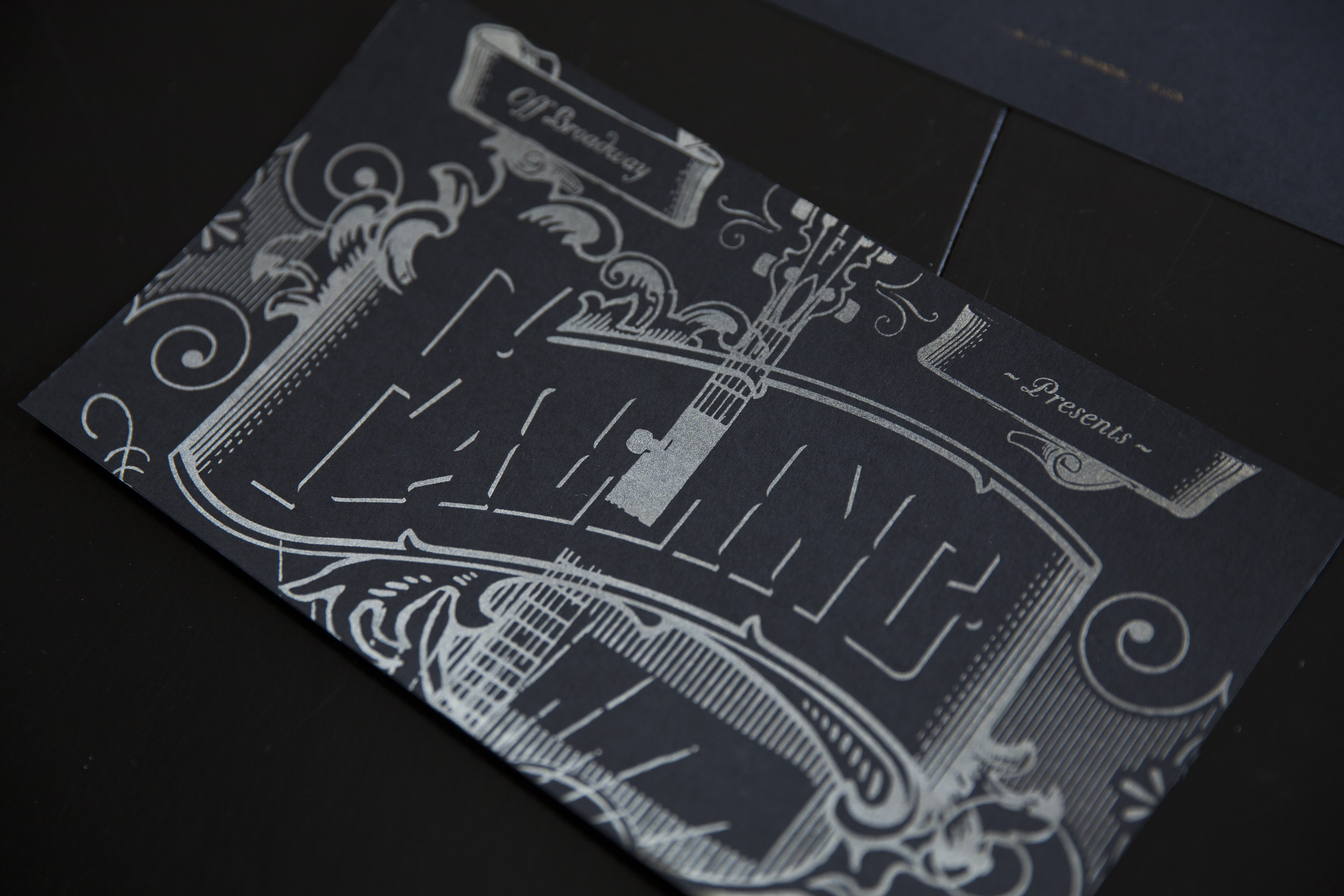 Gold
The Falling Fences gold is a richly saturated, warm gold that’s nearly copper. The goal in the gold was not only to create a rich and warm saturated gold color but also to incorporate metallic ink to add subtle nuance and depth to the print. Simply flat color would not do, nor would a raw metallic gold out-of-the-can. It needed a bit of tweaking to match the color we had our hearts set on.

The first layer of gold proved to be an inexact science – more like alchemy. You can see the variations on a theme Melt went through to pinpoint the exact formula for the Falling Fences gold. Out-of-the can metallic gold had the warmth sucked out of it by the paper, appearing platinum instead. But we were getting closer with each pass.

Melt played with a lot of mixes: some containing lime greens, hot pinks, and neon yellows — almost imperceptible after being drawn across the paper. The proportions of added color needed to be exaggerated to really get the orange glints of the ink to show through. Each layer and mix brought out a different tone in the gold. Once we’d matched a true “gold”, we realized that it didn’t pop as it should thanks to that troublesome Mohawk stock.

The uncoated nature of the paper made ink soak into the paper at a rapid rate. As a solution, Melt resolved to pull the print in 3 layers of pigment, each building on the previous, to create depth, dimension, and the perfect level of saturation to match the Falling Fences gold.

White
Perfection attained with the gold, the next layer of screening moved on to white.

The first pulls were very transparent resulting in a print that lost the intricate detail in the etching. Standard white screenprinting ink for paper proved to be too translucent and runny (like the texture of egg whites), allowing the ink to bleed into the counters and delicate in-lines of the type. When pressed to the page, the white ink was almost entirely absorbed into the paper, leaving little pigment on the surface. The print looked worn and not in a good way.

Melt tried an old-school printer’s trick by adding cornstarch to the ink as a natural thickener. The ink became more viscous, but the cornstarch did not solve the pigment problem. So, in favor of a more viscous and more pigmented ink, he switched to a white fabric ink. The new ink rested up on top of the paper and, with two pulls, paint’s thickness prevented it from soaking into the paper, allowing it to dry perfectly while retaining the fine internal detail of the design.

The ideal balance had been achieved. Melt’s solution was to use intensely saturated ink and pull the ink across the page multiple times, three hits of orange, two hits of white. The layered inks built up the opacity and integrity of the individual colors on black, providing the vibrancy and depth that we wanted.

By the end of the lengthy troubleshooting process, Melt hit the nail on the head with color, registration, and quality. Satisfied with the outcome, Melt was able to realize the beauty of the TOKY designed poster and truly convey the spirit of Falling Fences.

“It was incredibly satisfying — and fun — to work with rad artwork for a local band.”

A close up on the level of detail shows the incredibly high bar of expectation on the screenprinting process.

Adding another layer of customization, Joe Stickley, Sean Canan, and Ryan Kennedy all came by the TOKY offices to sign each poster. 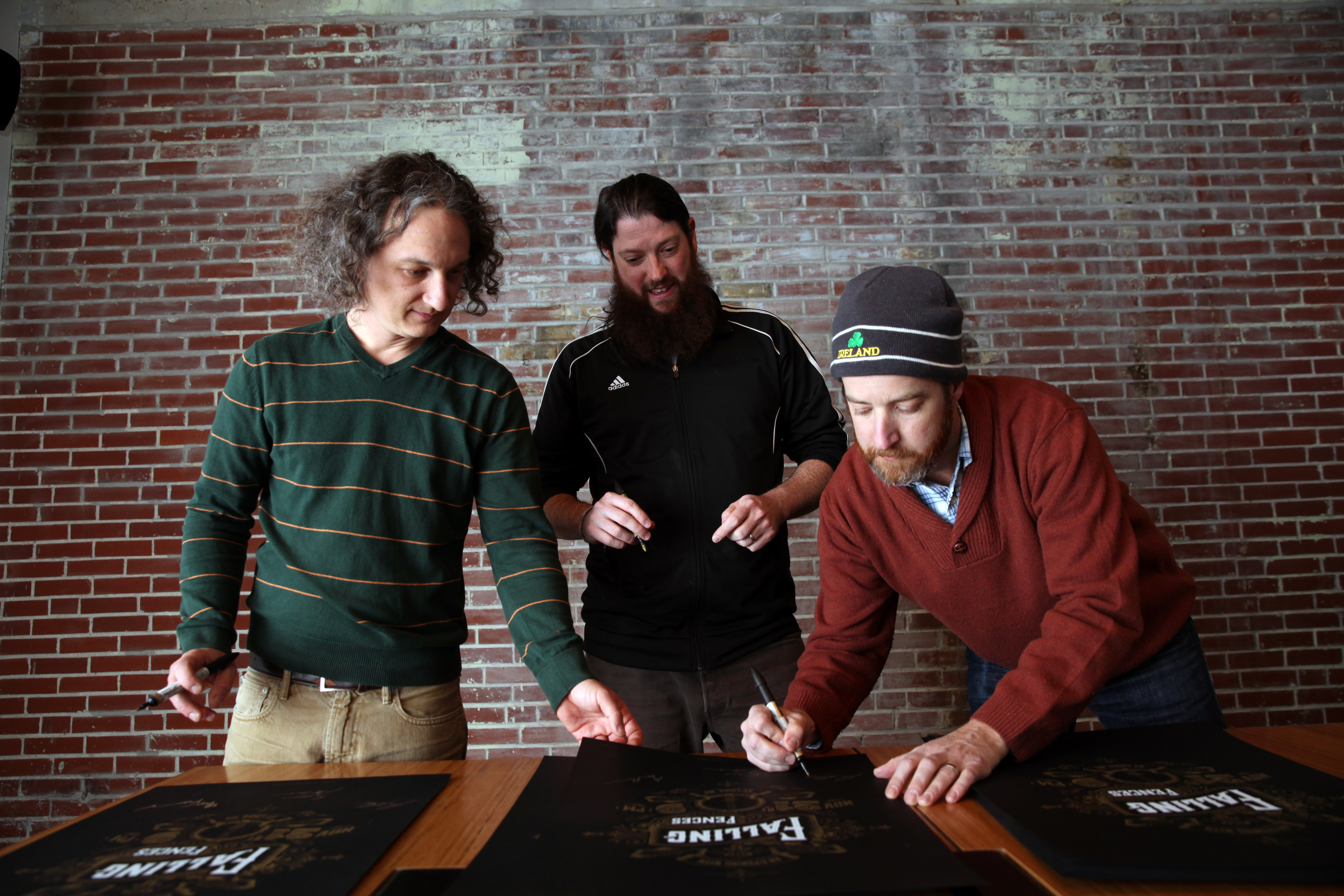 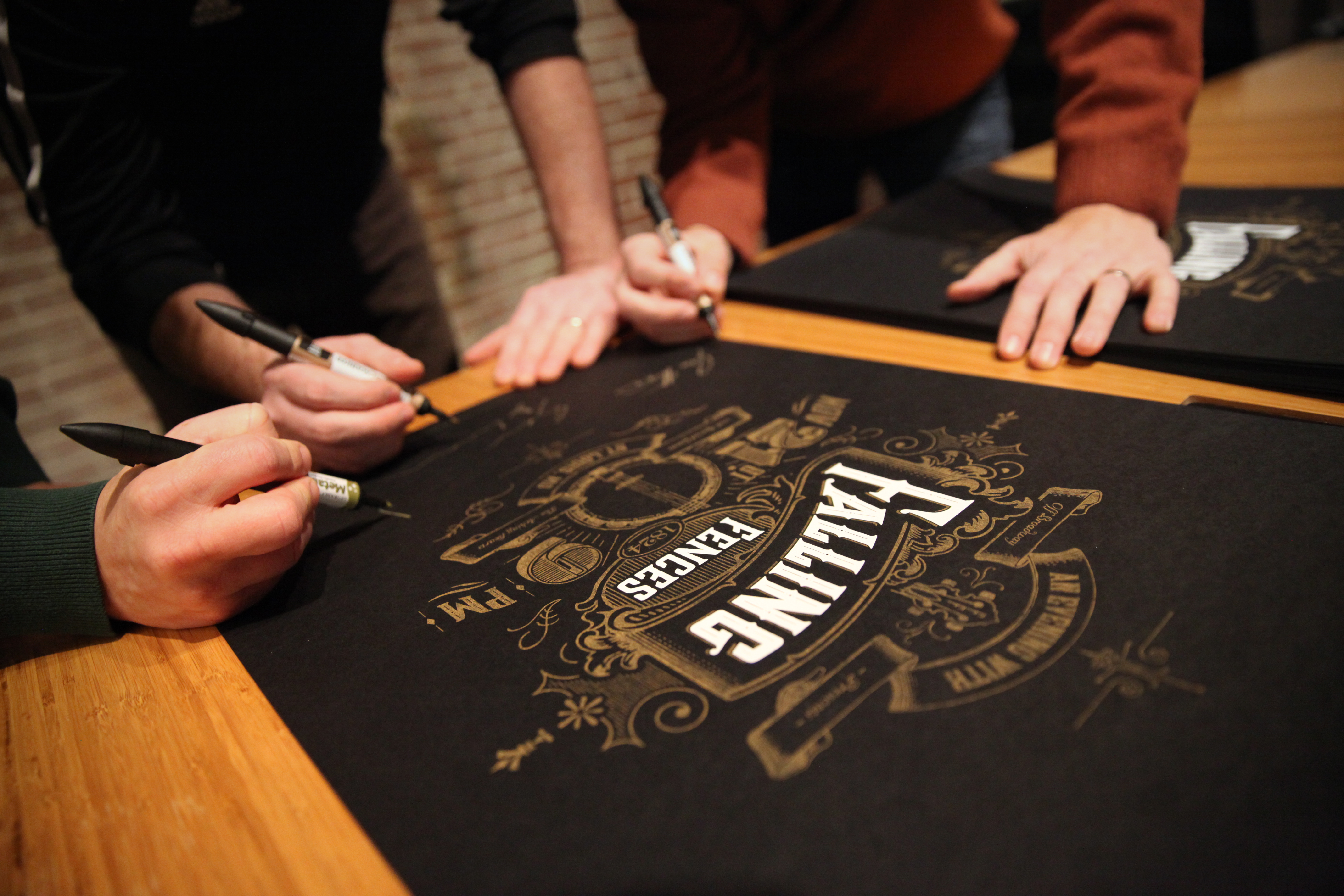 TOKY print team found the PERFECT warm, coppery metallic marker for the boys to use. The poster was sold at their November 9th album release show, and was a huge hit! Start to finish, the Falling Fences poster was a labor of love and one of our favorite projects to date!