The Oregon Ducks have the strongest brand in college football.

From distinctive uniforms and top-notch marketing campaigns to creative environmental branding, the team’s look and feel is world class.

In the first ever college football playoff it came down to two teams this past Monday. The tradition-rich powerhouse of the Ohio St. Buckeyes and the fast-paced innovative Oregon Ducks.

It was tradition vs. innovation, not only in the style of play but how each program rose to the biggest game in the college football season.

Oregon has exploded on the scene in the last decade or so by creating a unique brand. The brand reflects the fast-paced style of play, innovation and appeals to a younger demographic, mainly recruits. In a field (no pun intended) steeped deeply in tradition, how do you break through and stand out against storied programs such as Notre Dame, Ohio St., Alabama and USC as a national program?

Branding. Well, that and Phil Knight…

In 1995 Nike founder and Oregon alumnus Phil Knight stepped in and saw an opportunity to re-brand his alma mater. In a brave move, Nike created a campaign in 2001 for Heisman candidate and Oregon quarterback Joey Harrington. 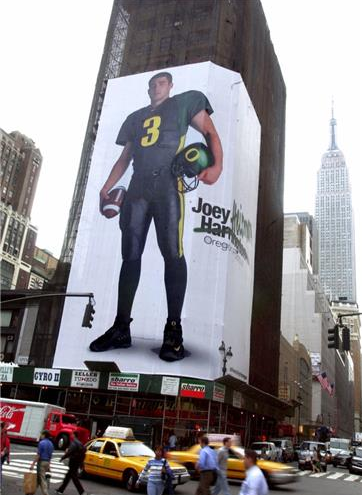 Incredible moment…being a New Yorker, we were all puzzled by this initially and then realized its brilliance. It was clear that Nike was using this campaign as a platform to elevate the O’s national prominence as well as to use it to sell more products and services.

The marketing campaign for Joey Heisman worked and Oregon was now on the national radar as a football program. The next move in the Oregon re-branding strategy was a huge investment in world-class athletic facilities.

Nike strategically separated itself from its direct rivals USC and UCLA by exploiting the weakness’ of the program’s facilities. Oregon created facilities unmatched by any program in the country, not only in features but in design.

This branding overhaul extended to the team’s physical space. My favorite aspect is the flock of ducks sculpture. A series of chrome ducks weave through the skybridge representing the ‘flock’ of Oregon Ducks that have been drafted into the NFL. The duck’s color represents a specific draft round and each Hall-of-Famer has a gold-dipped head. The finishes on the ducks give a nod to Nike’s infamous Oregon helmets. There is a carbon fiber set, a matte black, and the yellow, green and silver ducks have a chrome finish. Each duck has the initials of the player it represents on its body. 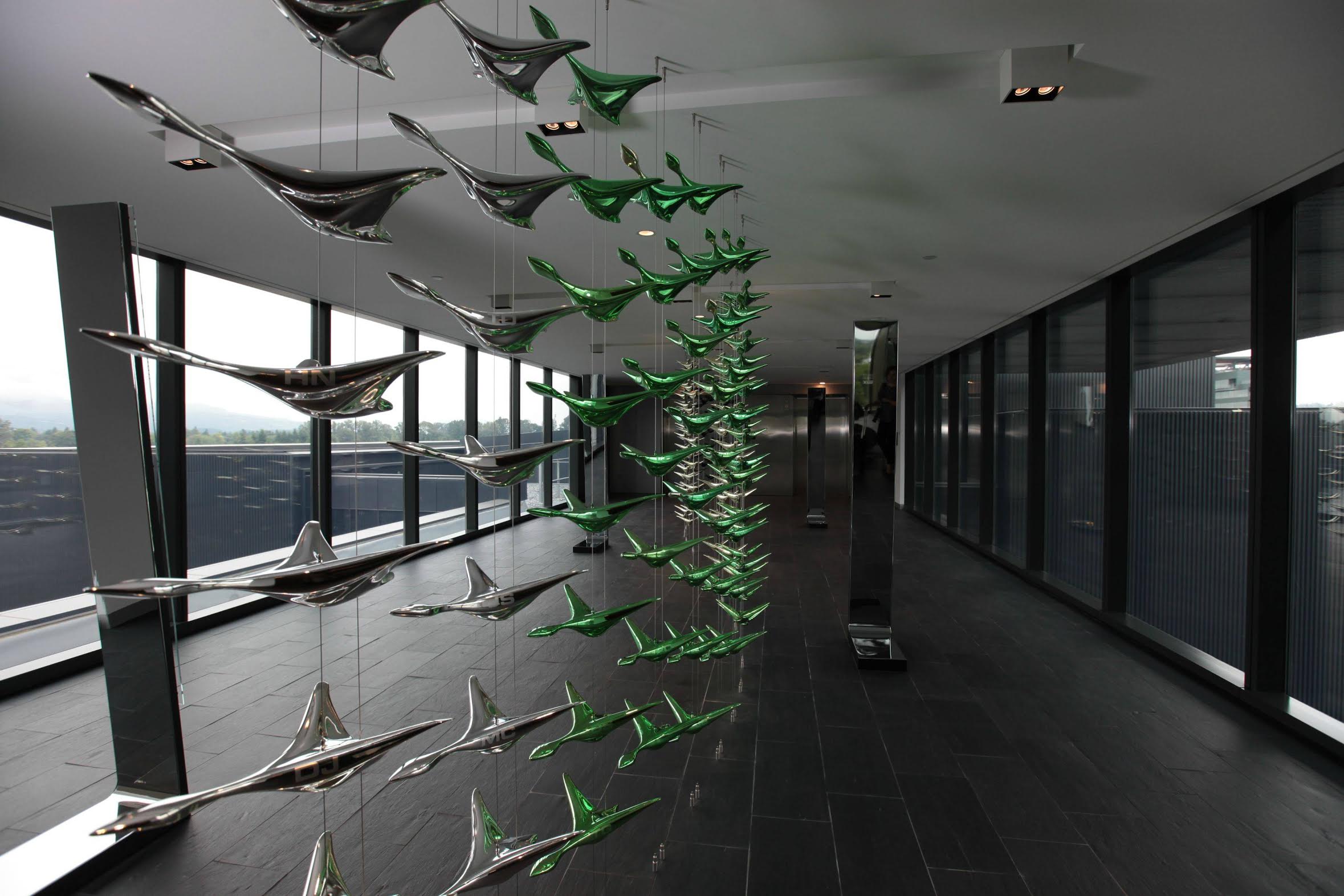 The final and most noticeable piece was the uniforms. Oregon has become a trendsetter in the college football landscape. The uniforms make the brand even more distinctive in college football. Love them or hate them, you can not mistake Oregon for any other team. They definitely stand out as the future of football branding. 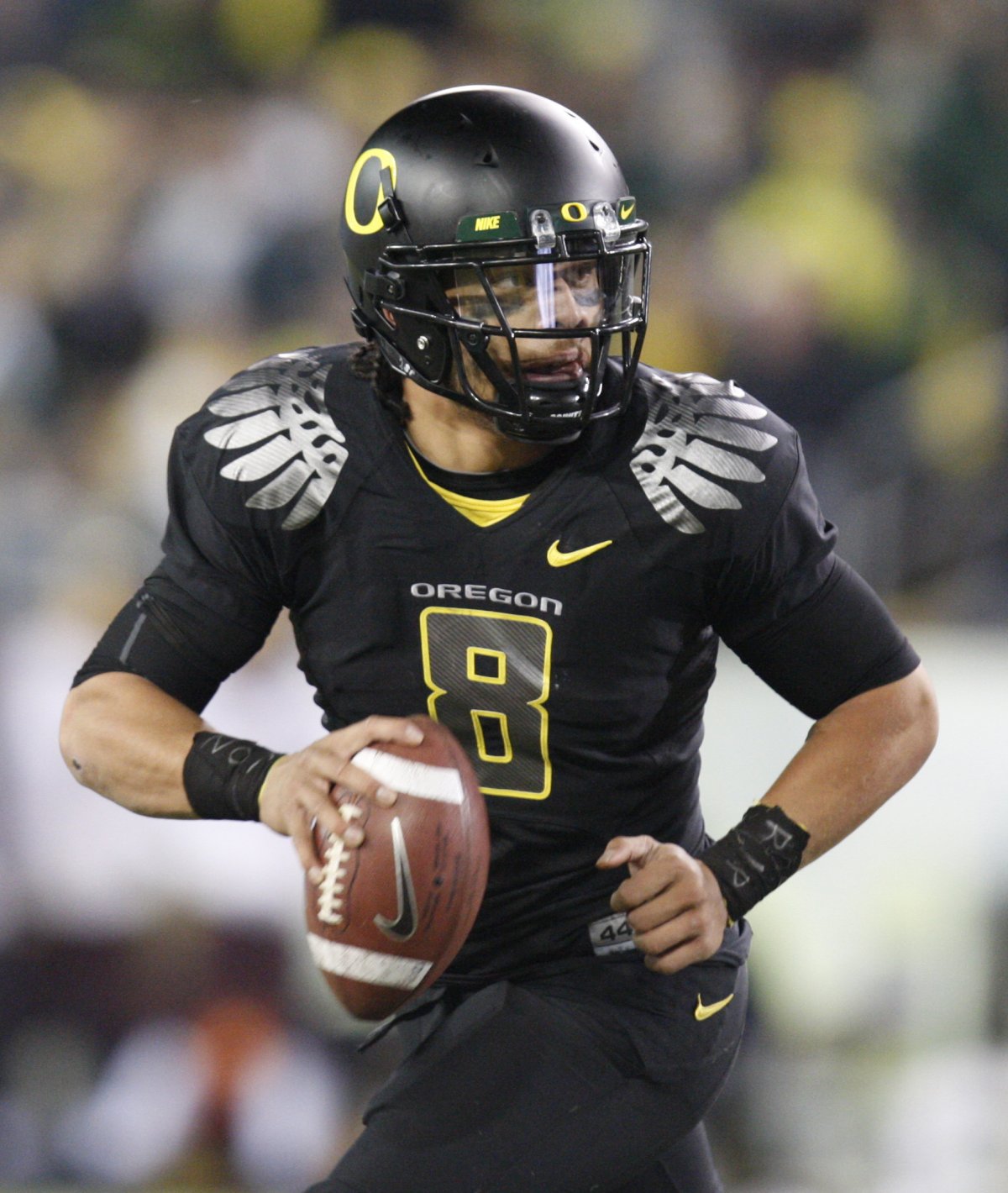 It was really part of the re-brand of Oregon Athletics. Tinker Hatfield and Michael Doherty from NIKE were there at the beginning along with Jim Bartko from our staff. The goal was to have the most innovative uniforms and technology available. It just so happened they also looked different and were designed to attract the younger demographic.
– Craig Pintens, Oregon associate athletic director 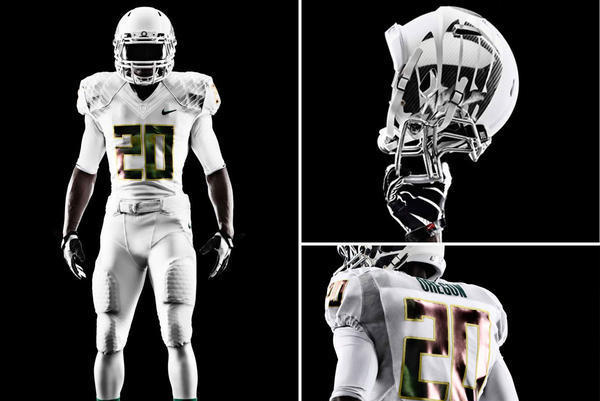 Oregon football and Nike have made uniforms fashion, therefore change is necessary. Also it expresses the innovative base of the relationship and the products and services. Again, it keeps everyone asking “What’s next?”
– Edward O’Hara, Senior Partner / Chief Creative Officer, SME, Inc. 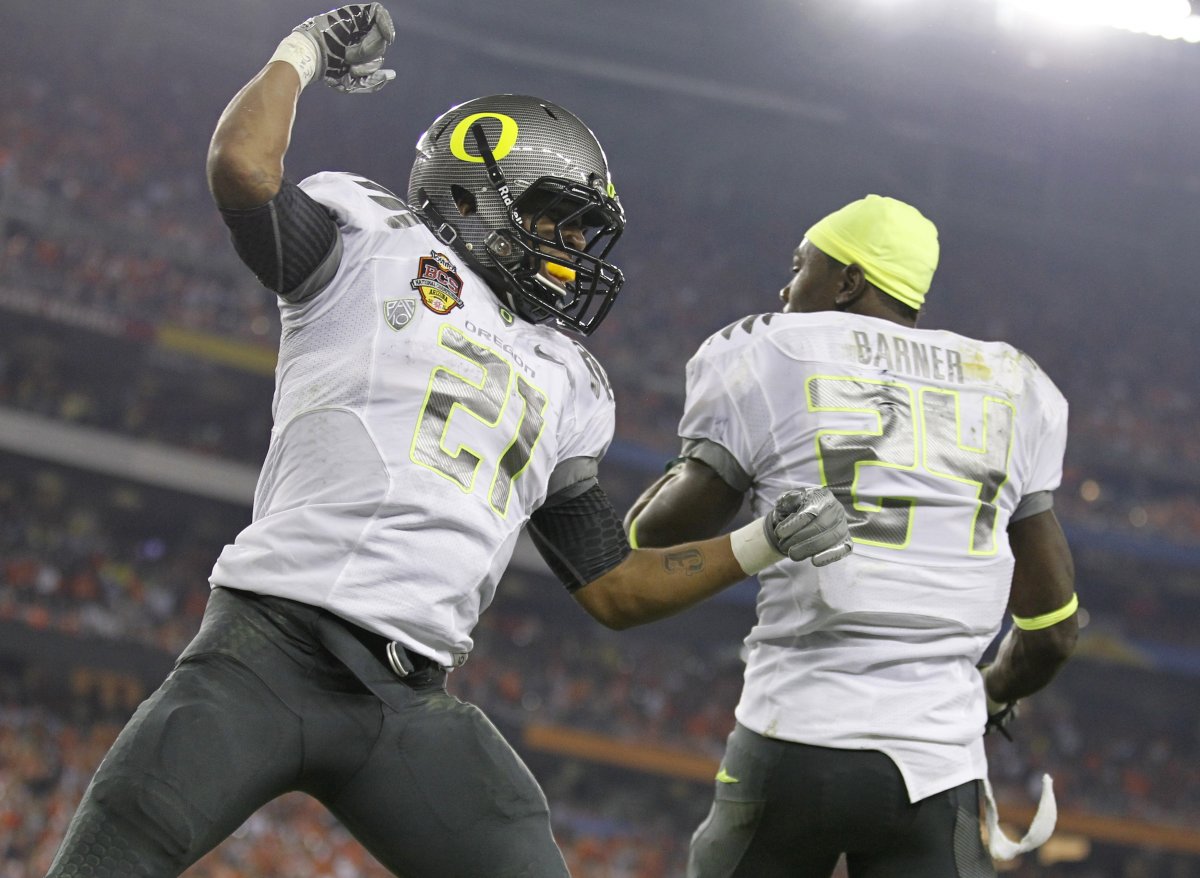 In the 2011 BCS championship game, Nike’s top football uniform designer breaks down the thought behind each aspect of the uniforms, noting how the colorway was used to draw attention to the lightning-quick reflex talent of the team. Every aspect of the aesthetics showcases the innovation of the Nike designed gear.

As a designer, I can’t help but look forward to what is next. It is truly amazing how much influence that Oregon has had on college football in such a short amount of time.

Many colleges are now adopting the “alternate thread” uniforms including storied programs like Oklahoma and Notre Dame. The matte and chrome helmets, black on black numbers all influenced by Oregon and Nike. I love seeing all the different combinations and the willingness to break the design mold and take risks every Saturday.

Oregon is the strongest brand in college football, unfortunately, the brand can only do so much. Ohio St. defeated the Ducks in the national championship game Monday, but the ducks looked the best, even in defeat.