Birds on a Bat: The Evolution of the Cardinals Franchise Logo

St. Louis is the center of operations for most things TOKY and we’ve noticed a distinct uptick in baseball fever around town since the Cardinals are making another run for the World Series.

You’d be hard-pressed to walk down the street right now without seeing at least one person sporting the Cardinals logo. That’s the way things go in St. Louis. With 11 World Series titles and 19 National League pennants, St. Louis is home to one of the best franchises in baseball.

Our interest in the Redbirds goes beyond rooting for the home team. You might recall the slight (but significant) change to the official uniform logo last year. No? We’ll get to that. It got us thinking about the history of the Cardinals logo and the evolution of design.

In a survey in 2012, ESPN readers ranked the Cardinals’ “birds on a bat” the most iconic logo in sports and first in baseball. The Cardinals were behind the Montreal Canadiens (NHL) and Chicago Bears (NFL). Let’s look at how it came to be.

The first formal logo associated with the Cardinals as a team was in 1900. The team, known then as the Brown Stockings (or Browns for short), wore an interlocking “StL” on the sleeve and cap of the uniforms. Local legend has it that when the Browns added a hint of red to their basic white uniforms in 1899, a sportswriter overheard a fan comment on the color and ran with the moniker. The St. Louis Cardinals Encyclopedia made this story canon in 1998. Officially:

“One day, Willie McHale, a sports reporter for the St. Louis Republic heard a female fan praise the color as a ‘lovely shade of cardinal.’ So McHale called them Cardinals.” 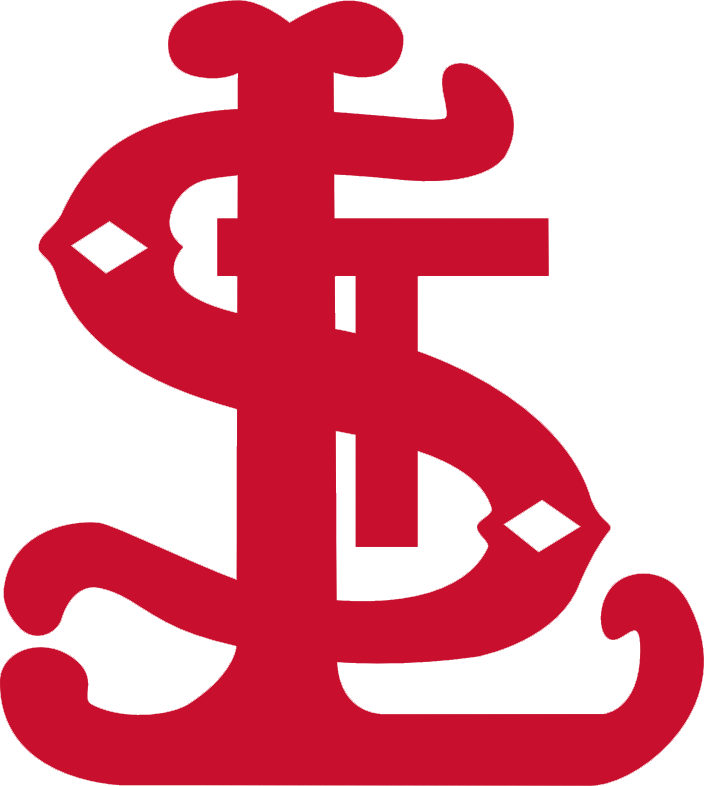 McHale’s nickname caught on enough that when the St. Louis Post-Dispatch was writing about the team in 1900, they noted both the “cardinal red” hue and referred to the team as a whole as the “Cardinals.”

After all, it was an age when naming a professional sports team was a much simpler affair. The 1900 baseball season boasted our very own Cardinals (née: Brown Stockings), Reds AND Red Sox, White Stockings (now the White Sox), Blue Stockings, and Greys, all named for their socks or other colorful bits of uniform detailing. The rest, as they say, is history.

It took until the Roaring Twenties for anyone creative enough to associate “Cardinals” with the birds. It’s easy to see this logo as a “first draft” for nearly every Cardinal logo that was to follow. Those two birds have remained conceptually undisturbed since then with the exception of 1956.

In 1922, the bat was black and the birds were more figurative than literal. The “C” hooks around the bat just as it does today. Their uniforms also featured pin-striping and piping along the seams, both of which gained popularity beginning in 1907 and would become a staple for decades to follow.

Intriguingly, the press and souvenir buttons from the 1926 season hint at the design for the following seasons. The team took home the NL Pennant and the World Series title that year. 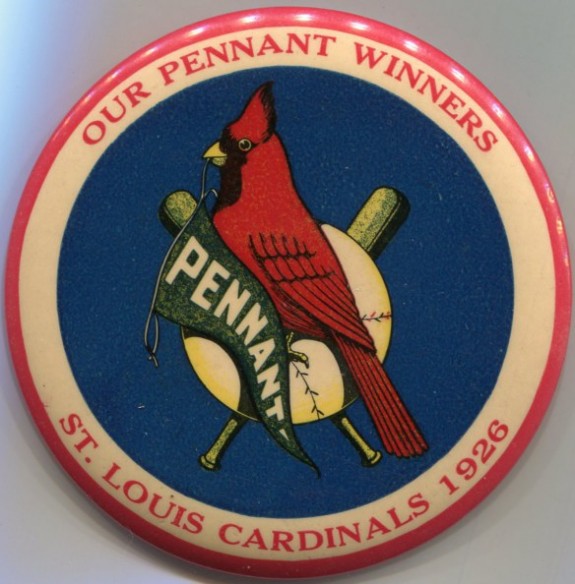 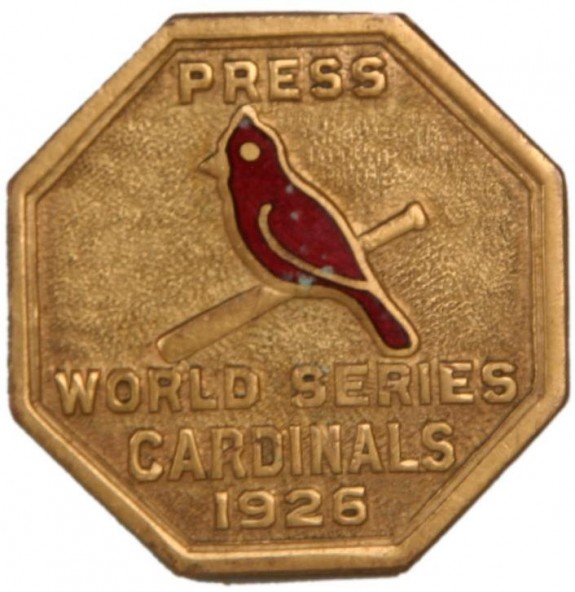 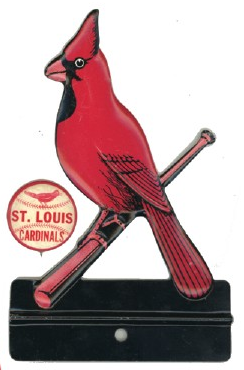 The 1927 Cardinals logo evolved into a very literal, single bird perched on a bat. It’s all very monochrome and the bird is decidedly plump. In a wider view, this was the first (and only) season to see “St. L” abbreviated on the jersey sleeve. The team name doesn’t appear at all, but “World Champions” appears around the cardinal for some subtle intimidation.

All told, it was a paring down of both the logo and the city name. Whatever they did, it seems to have worked, sort of. The Cardinals won the NL Pennant but lost the World Series (they were swept by the Yankees).

In 1929, the Cardinals decided the bird looked lonely by itself on the bat and brought back the design from three years earlier. 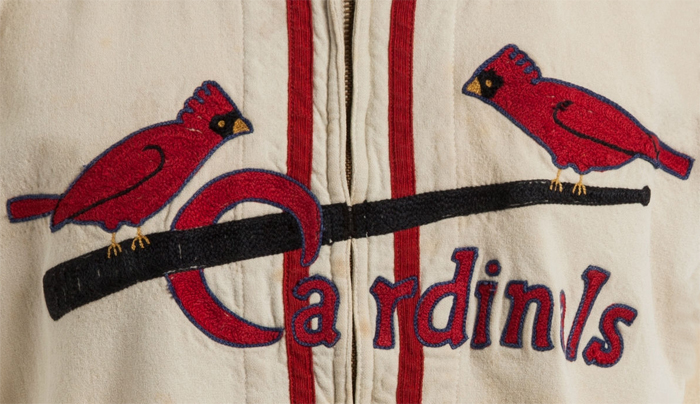 Radio helped the St. Louis Cardinals enjoy widespread popularity through the 1930s and helped spur the team into their golden era of success in the 1940s.

The minor-league farm system benefitted the Cardinals very well in this period, producing a team with talent like Stan Musial, Whitey Kurowski, and Walker Cooper. Manager Billy Southworth still holds the highest winning percentage of any Cardinals manager (.642) and brought the team to a winning percentage higher than any other Major League team (.623).

1944 saw the only all-St. Louis World Series with the Browns facing off against the Cardinals, the third and last time a World Series stayed within a single city (1921 and 1922 were both in New York).

Tangentially, the Cardinals dodged a fashion faux pas in 1946. Traditionally a team that’s conservative in their uniforms, they briefly made a foray into red satin uniforms for evening games (along with a few other fashion-forward teams of the day). Realizing that, while it may be de rigeur, it just wasn’t “them” the Cardinals sold their shiny uniforms to the St. Louis Muny League, a junior baseball club. 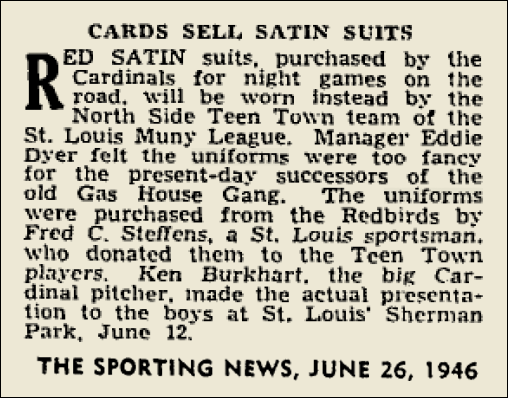 Fueled by the post-war prosperity, the St. Louis Cardinals opted to transition their logo and uniforms into something sleeker, modern, and more professional — a trend being followed by many MLB clubs at the time. The 1949 Cardinal logo put the twin birds on a diet and made them look less like roadrunners and more like realistic cardinals, thus slightly closer to what we recognize on contemporary uniforms. 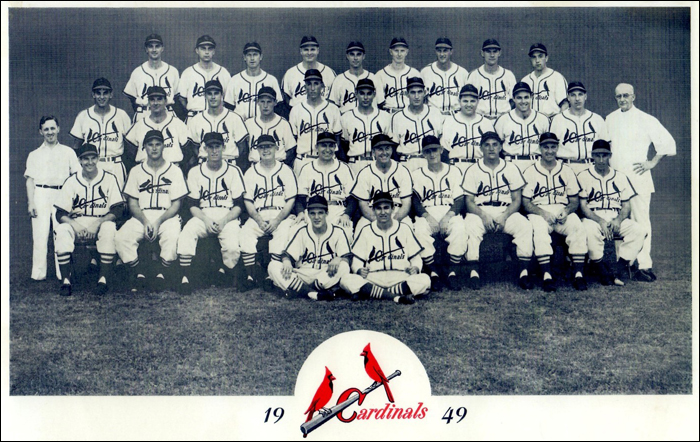 Then club president, Robert Hannegan, described the change for the upcoming season to The Sporting News in December 1948:

“To the naked eye, our usual Cardinal emblem looks the same, but actually we’ve revitalized the two Cardinal birds, substituted a baseball bat for what appeared to be a softball stick, and streamlined the type used in the world ‘Cardinals’ on our insignia. … The Cardinals are pepped up.” 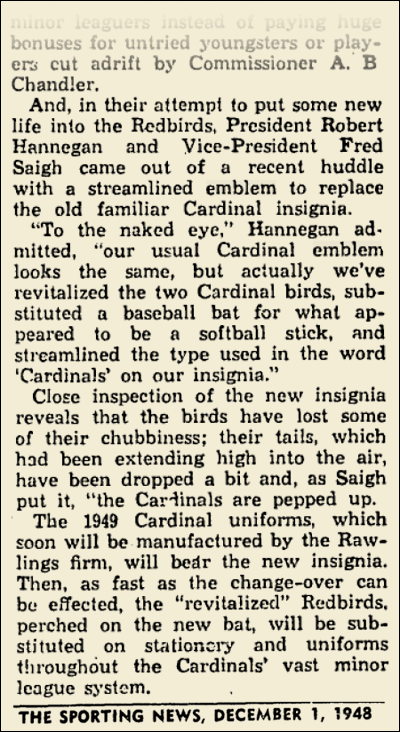 It doesn’t get much better than this image of Stan Musial proudly wearing the Cardinals uniform. This photo is the essence of St. Louis baseball. 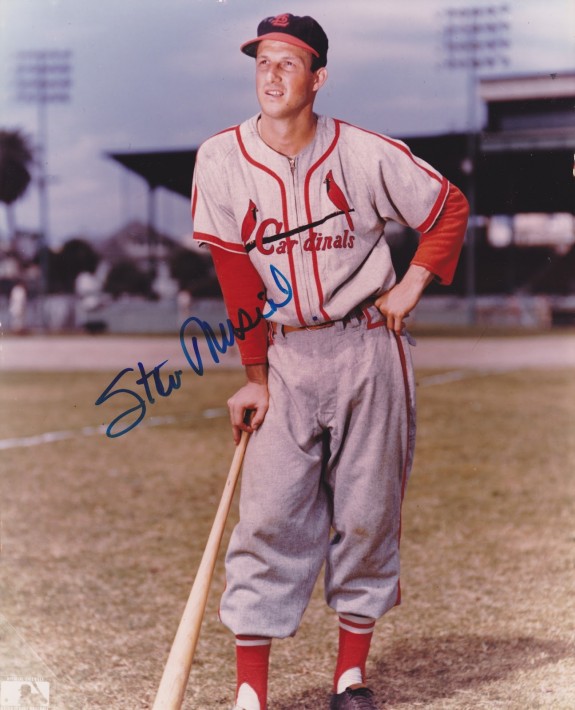 The beginning of the Gussie Busch era brought more changes to the Cardinals logo evolution. The “birds on a bat” logo was replaced with a single anthropomorphic cardinal in a batter’s stance. This logo appeared on the sleeves of the game jerseys with “Cardinals” embroidered on the front with the trailing flourish that the Cubs popularized in 1932.

You can see both the Cardinal on the sleeve and the “swoosh” on Ken Boyer’s uniform.

Dubbed the “Sluggerbird,” it only appeared officially on game uniforms in 1956 and is considered one of the biggest gaffes in baseball uniform history. It was used as a secondary logo on jackets for the rest of the era, however. Following the Sluggerbird debacle, the Cardinal team uniforms brought back a modified “birds on a bat” logo with some changes incorporated from the 1956 concept.

Notably, the bat was now yellow instead of black. The trailing flourish was replaced by the classic “C” hooked over the bat. The capital “C” retained a little bit of the previous design’s ending swash on the overhang on the “C.” This nod to the classic baseball era style has remained consistent through contemporary Cardinals’ uniforms.

The 1960s logo design, with its twin birds on a yellow bat adorned with a slightly flourished “C” should be familiar to modern baseball fans. It is still the essential design on Cardinals uniforms today. An alternate official logo of the era featured a very angry cardinal in a pitcher’s stance. This logo never appeared on uniforms but is worth mentioning because it has been revived in “retro” campaigns since then. The angry cardinal alternate is much more in line with the mid-century iconography of the time; charmingly vintage now, it was on-trend for many mascots and logos of the mid-fifties.

The late 1960s through the late 1980s was a huge winning run for the Cardinals franchise. Two World Series wins and five league wins, in addition to the only “I-70 Series” (to date) against the Royals, the Cardinals boasted a consistently well-run baseball machine. This is the era for which most dyed-in-the-wool Cardinals fans feel nostalgic. It’s not surprising that the era’s official logo is one of the most iconic.

While the full uniforms were still embroidered with the team name and “birds on a bat” emblem, the baseball patch logo showed up frequently on sleeves and official merchandise. In contrast to the last time a single bird perched on a bat in 1928, this cardinal was cartoonish and even cheeky. His chest puffed out pridefully and he seems to be smirking. He’s also donned a rakishly tilted baseball cap and his talons are rounded out. All things considered, he’s a much friendlier and prouder logo.

Showing that the Cardinals franchise was looking to change their overall image and produce a more personable team identity, the baseball logo was followed closely by the birth of Fredbird, the team’s official party-bird mascot. A direct interpretation of the official logo from this period (a cartoonish, cocky cardinal in a ball cap), Fredbird shows his team spirit with the addition of his own jersey.

The official logo from 1998 removed the baseball badge and toned down the cardinal’s cockiness in favor of a modern and realistic-looking bird.

The cardinal is actually gripping the yellow bat rather than merely standing awkwardly on top of it, which hadn’t been done since the 1930s. The official team uniform still carried the twin birds on a bat, but the franchise logo only features one.

As you can see, the Cardinals logo is a very literal condensation of the team name design. Alternate logos have remained variants of this official logo, changing the background color or overlaying the logo itself over the stadium. The use of a unified theme across official logo and uniform design without sizable differences in alternate logos marks the most consistent branding in the Cardinals’ team franchise history.

For the first time in 80 years, the Cardinals sported a jersey that boasted the name of the city and not the ballclub. “St. Louis” was stitched on the front of the jerseys, replacing the decades-long tradition of curling “Cardinals” around the iconic birds-on-a-bat design. They joined 26 other teams with the introduction of an alt uniform, a third uniform option to join home white and away game grey uniforms. It was worn for Saturday home games. 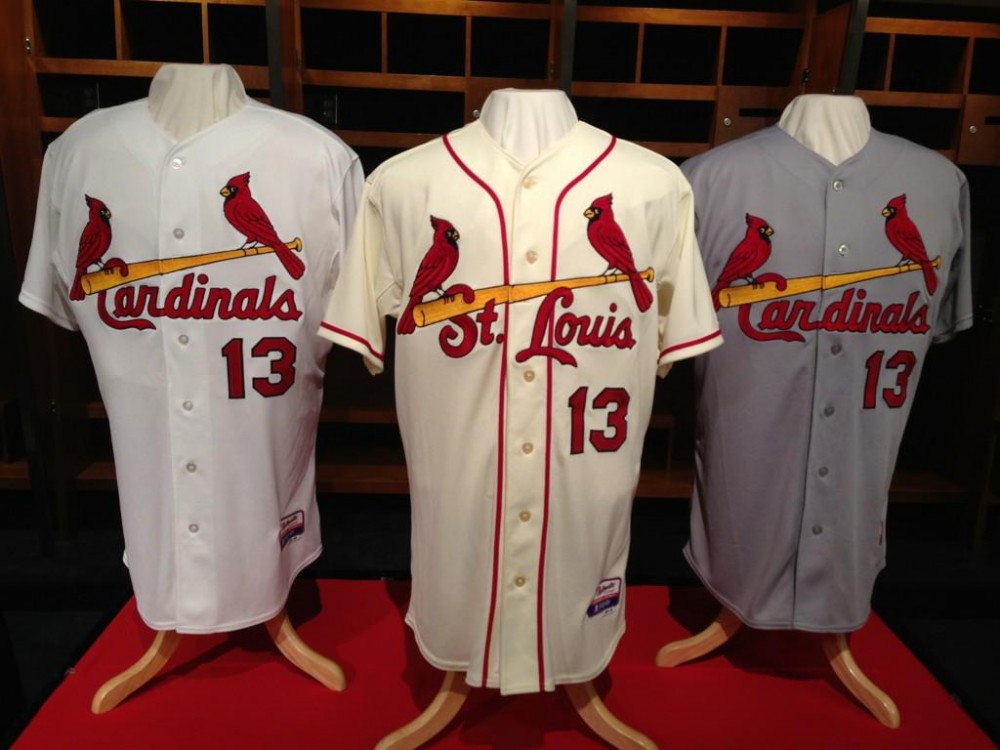 The birds on a bat from the 2013 jerseys show a few small tweaks, a further evolution to the official team design. The stitching is more detailed and prominent, the bat has become multi-dimensional with a better sense of depth, and the birds have fully detailed eyes and feathers lushly embroidered. 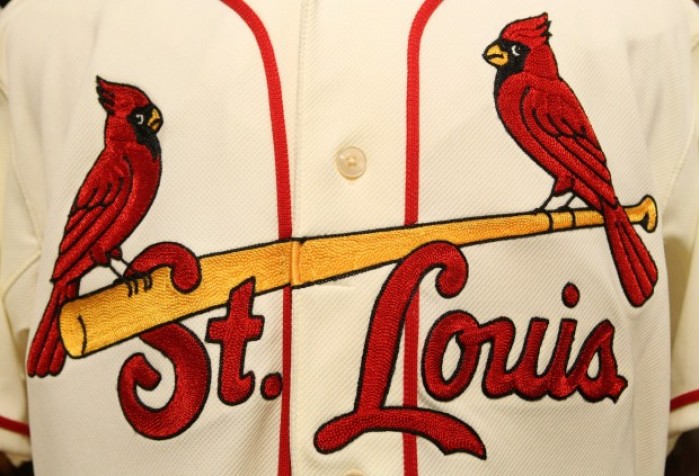 The alt design incorporates visual callbacks to the franchise’s historical logos and uniform design. The off-white fabric looks like the original flannel uniforms and the alt uniform resurrects piping that has been missing from the Cardinals jerseys since Stan Musial was their all-star player.

While not a change to the official franchise logo, it is clearly within the same brand family. The 2013 alt jersey builds on the established logo with the “S” of St. Louis hooking over the bat and ending with a swash on the “L” in place of both visual elements from the official Cardinals “C.”

There’s a reason the St. Louis Cardinals have such an iconic logo. It has a storied past, a distinct visual evolution, and a history of great players and championships. The Cardinals logo has come a long way and carried with it the hopes of multiple generations of Cardinals Nation fans.