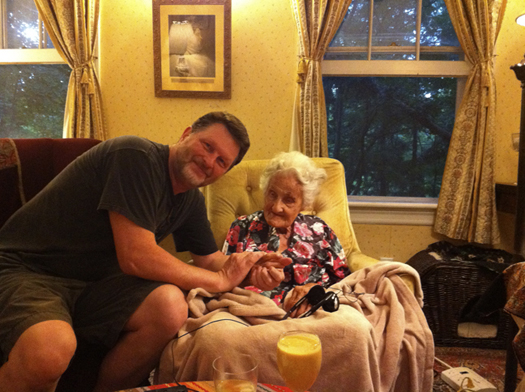 TOKY’s John Foster visits with then 104-year-old Eva Zeisel at her summer home in New York, just six months before her passing on December 30, 2011.

Eva Zeisel,  a pioneer of 20th-century industrial design, celebrated her 105th birthday with family and friends last November 13, 2011, and passed away less than two months later on December 30. Like so many others who appreciated her influence in modernist design, I was sad to hear of her passing. Her life, at times, read like a Hollywood script.

My wife and I had the rare opportunity to meet Ms. Zeisel last July when I was invited by her daughter Jean Richards to visit them at their summer home and studio in Rockland County, NY, near the small town  of Nyack.

Starting from the home of good friends Aarne and Tina Anton, who happened to live in the same county as Ms. Zeisel, we made our way along gorgeous tree-lined roads. Fortunately for us, Aarne and Tina live less than five miles from Ms. Zeisel, so they were very familiar with the area. With Aarne as our guide, it wasn’t long before we turned into a gravel driveway, providing our first glimpse of our destination. In front of us was a two-story, early 20th-century frame farmhouse, quietly nestled about fifty yards from the road. A canopy of trees provided premature darkness for our late afternoon arrival, and I could see a warm light on in the front window. As we approached, telltale signs of creativity were evident. Window ledges ahead contained assortments of natural objects — a smooth shaped rock here, a thistle or shell there.

Eva Amalia Striker was born in Hungary in 1906 to a wealthy, assimilated Jewish family and was fortunate to grow up in a life of privilege. As a young woman in 1923, she chose not to follow the same pursuits of her accomplished family (scientists, historians, economists, engineers). Instead, Eva chose to enter the Hungarian Academy of Fine Arts to study painting, and was also tutored at home by well-known painters. Her daughter Jean explained to me that her mother studied painting only a short time when she decided to change her focus to ceramics. No doubt this decision pleased Ms. Zeizel’s mother, who had been encouraging her daughter to find a profession that would prevent her from “starving in a garratt.” With a new direction to pursue, Eva apprenticed herself to the last master potter in the medieval guild system in Hungary, and graduated as a journeyman.

For the next 10 years, Eva worked at a variety of professional ceramic positions, including apprenticing with a master potter and even designing her own figurines, pots, and vases on her parents’ estate. From 1928 to 1930 she lived in a small town in the Black Forest, designing hundreds of objects for the Schramberger Majolica Fabrik, and from 1930 to 1932 she lived and worked in Berlin. This period of time in Germany was the Golden Era of the Weimar Republic, a period of all-night cabarets and parties. According to daughter Jean, the youthful Eva was there to see it all. But dark times were looming, including the economic collapse of Germany (which followed that of the U.S.) and, worst of all, the emergence of Adolf Hitler and the Nazi Party.

On New Year’s Day in 1932, Eva left Germany for a holiday visit to Leningrad, Russia. While there, she decided to stay permanently by becoming the fiancée of a friend named Alex Weissberg. With a new visa in hand, she went to work for the Ukrainian China and Glass Trust, which sent her to visit and work in various factories throughout Russia. It was through the Trust that she designed dinnerware and tea sets at the Lomonosov Imperial Porcelain factory. Eva remained in Russia for about five years, when, in 1936, she was shocked to be suddenly arrested and imprisoned by government forces. Russian citizens at that time were constantly being accused of plotting against dictator Joseph Stalin, and it was surmised later that she was falsely accused by a co-worker in an attempt to save their own neck.  Zeisel remained in prison for 16 months, a year of which was solitary confinement. Then, one day, as suddenly as she was imprisoned, her cell door was opened and she was released with nothing more than the clothes on her back. Deported to Vienna, Eva eventually left for England, by chance leaving on the same day that Hitler invaded the country. There she married Hans Zeisel, and the two of them sailed to the United States for a new life together. It was 1938, and the Zeisel’s made their home in New York City. Just one year later, Ms. Zeisel established the first department of industrial design and ceramic arts at Pratt University in Brooklyn. The courses she taught there were the first on ceramics for industry, rather than the typical “handicraft courses” that were being taught at the time. She taught these courses for many years.

On the day of my visit, I held Ms. Zeisel’s frail hand and asked her to tell me if she had a highlight in her long life. Though her voice was soft and almost inaudible at times, she was nonetheless direct with her answer:  “Let us separate my work and my life … the high point in my life was having my two children. The high point of my work was the Museum Ware by Castleton China. This is my favorite set. I had a show there [at MoMA] you know, in 1947.”

Daughter Jean later explained that Museum Ware was the “first all-white dinnerware set made in America. It was this design, which was designed with the approval of MoMA, that launched her fame in the United States.”

We were offered hot tea, and the conversation focused largely on pleasantries. I was hesitant to barrage this aged icon of design with too many questions. At times her pet cat would jump up to lay in her lap, and her hands would accept him with love and familiarity. The best was yet to come, when Jean nonchalantly asked if we would like to tour her mother’s studio.

At the time of our visit, Ms. Zeisel needed assistance to walk, so she remained seated when we rose to take the tour. The studio was located just off the main room in an upper level and was full with sketches, working maquettes, and scale drawings in charcoal of current designs and dreams yet to be realized. Most importantly, there were groupings of almost every major (and minor) work in the artist’s lifetime, from ceramic pieces created when she was a teenager to early paintings and designs that became the nexus of later work.

It wasn’t a surprise to see the curved, organic form everywhere in her studio. Tacked and taped to the walls were preliminary sketches of ceramic pieces and even working cardboard maquettes of her famous coffee table, the graceful glass-topped object with hints of Baroque styling and Noguchi classicism. With this special opportunity to view a lifetime collection of work in one place, it became clear to me that Ms. Zeisel rarely made forms designed to stand alone. Eva has been quoted over the years as saying that her work was inspired by the human form, including families and especially the mother and child. As our memorable visit drew to a close, we said our goodbyes to an extraordinary mother, artist, and national treasure.

You may learn more about Eva Zeisel at The Eva Zeisel Forum. A new book, Eva Zeisel: A Soviet Prison Memoir is also available online. 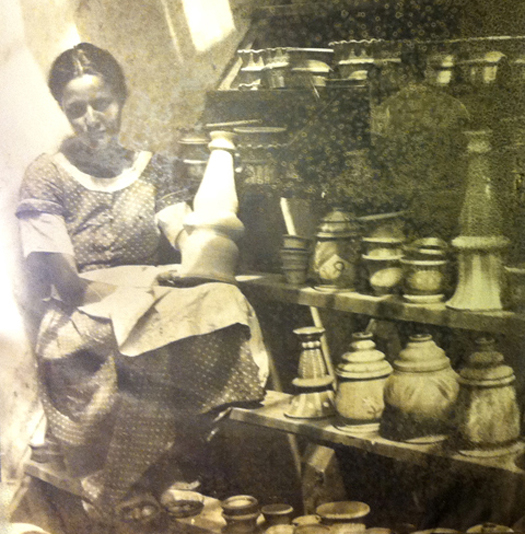 Early photograph of Eva Zeisel in her studio, c. 1930. 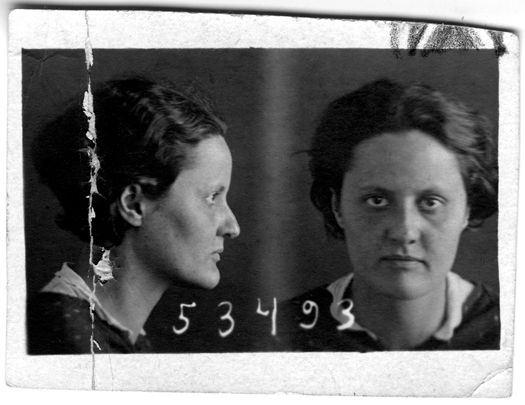 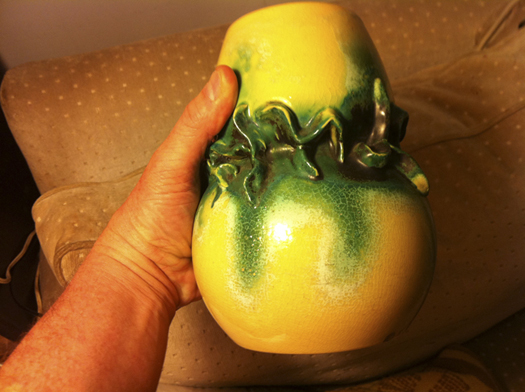 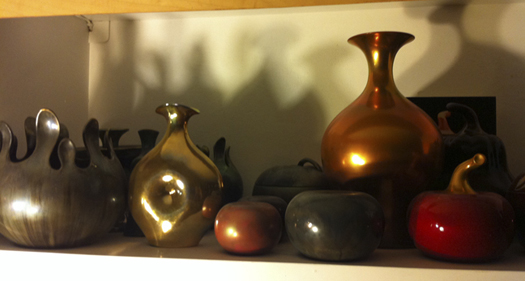 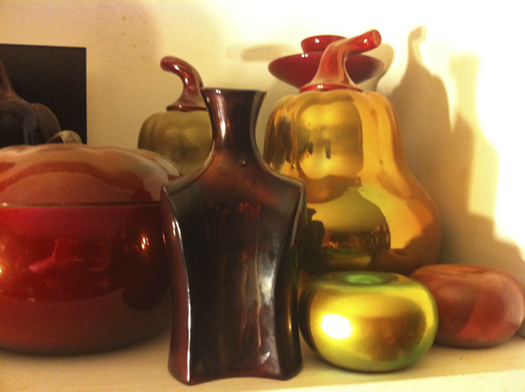 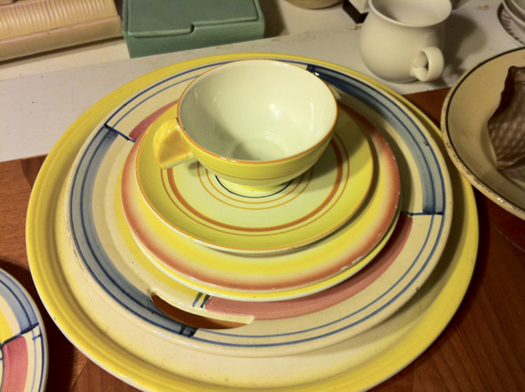 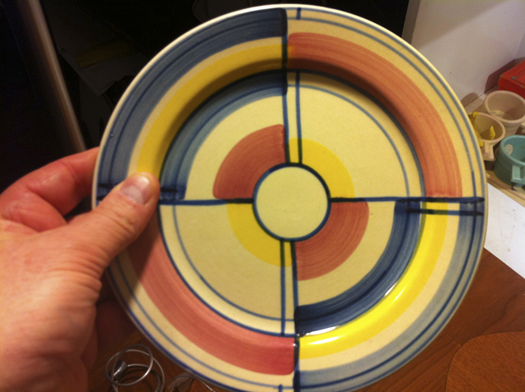 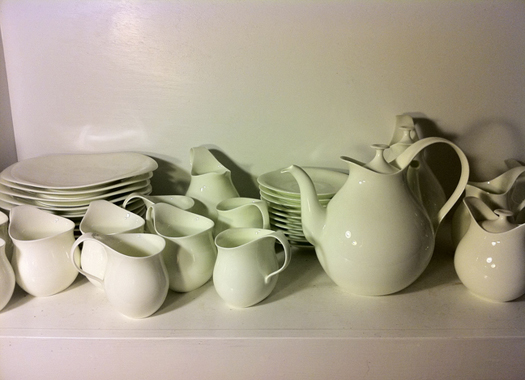 A portion of the Eva Zeisel Tea Set from the Imperial (Lomonosov) Porcelain Factory. Photo by John Foster. 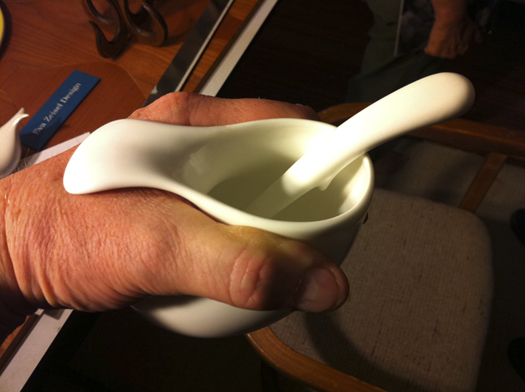 A feeding cup for a baby, ergonomically designed not to slip from the hand. Photo by John Foster. 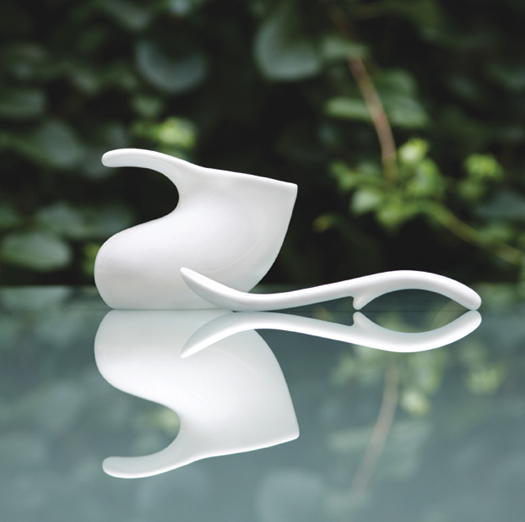 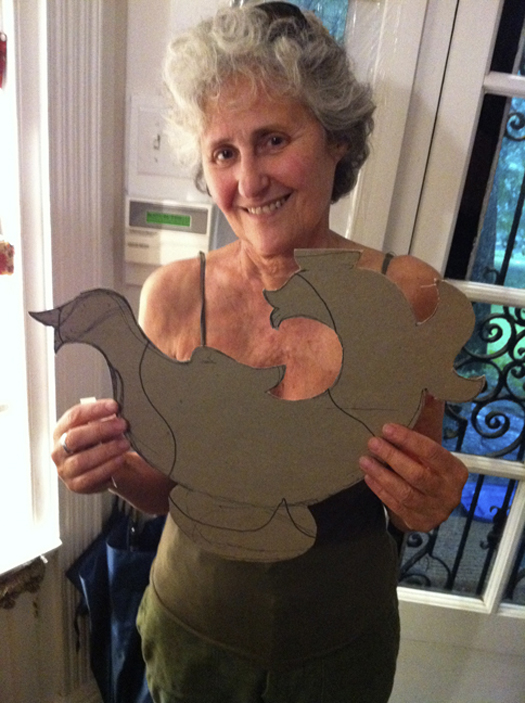 Eva’s daughter Jean Richards shows us a cardboard template for one of her mother’s designs. Photo by John Foster. 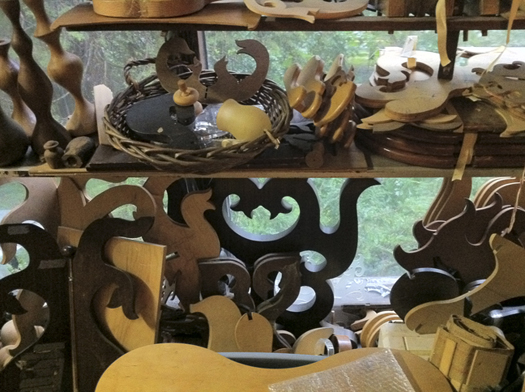 Patterns, preliminary designs, drawings and templates for the Eva Zeisel coffee table and other pieces were throughout the studio. Photo by John Foster. 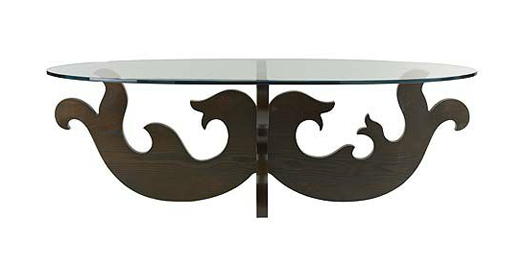 Note: This article kicks off a new TOKY blog series called “Artful Travels,”  which will continue off and on for the next few months. This particular post was published simultaneously at Design Observer, where TOKY’s John Foster is a regular columnist.