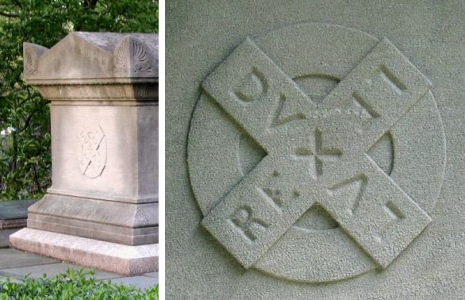 We were just given a wonderful tour of Bellefontaine Cemetery — a unique combination of historic architectural preservation, history museum, and urban park.

It was a real learning experience, filled with anecdotes (scandalous, heartbreaking, and humorous) about the famous and the forgotten. We spotted this symbol (above) on the side of a tomb not far from the famous Wainwright tomb, and had never seen the wonderful graphic inscription before.

A little Google digging and it turns out to be a three-layer puzzle; the cross at the center is an icon symbolizing Christ. Then, by reading the same cross at a 45 degree angle it becomes an “X”, the symbol for the hard “ch” sound in Greek — a second symbol for Jesus.

The third level of meaning comes from the three coded words that work with the X terminus, all at different reading angles: LUX, DUX, LEX, REX. This turns out to be a second century Christian inscription meaning “My Light, My Leader, My Law, My King”.

The tomb pictured above is Henry Longfellow’s tomb in Mount Auburn Cemetery in Cambridge, Massachusetts; the tomb we saw in Bellefontaine a near-perfect match. Which begs the question… was the St. Louis occupant an admirer of Longfellow (or at least his resting place), or did this ancient symbol come with its own Gilded Age brand standards?